Broadband, Wi-Fi, and the connected TV is the fabric that has fueled the growth of SVOD and is doing the same for free ad-supported TV services today. However, there is a large and growing number of people that are opting out of the wired ecosystem today.

According to Pew Research 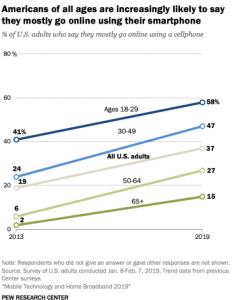 , 27% of adults say they do not subscribe to home broadband. What’s more, 80% of them (22% overall) say they have no intention of getting broadband. Instead, many rely on their smartphone to go online. Almost half (45%) of those without home broadband say the reason they don’t have it is that their smartphone lets them do everything they need online. Moreover, 17% are “smartphone only” Internet users.

A much broader swath of the population is mobile-first than just the non-broadband subscribers. 37% say they mostly go online using their smartphone. Among 18-29-year-olds, 58% say the same.

For more significant providers like Netflix to keep on track with US subscriber growth, it will need to find ways of addressing the mobile-only customers. The Pew data suggests the approach will need to be more than just providing shorter form content and supporting downloads. The 17% that are smartphone Internet-only users tend to be lower income and service cost will be an issue.

Providing a cheaper mobile-only plan could be an effective strategy with smartphone-only users. Netflix is trialing such an approach, but only in countries like India with much lower average incomes. It may need to expand the trial to the US to reach smartphone Internet-only users.

For smaller providers, they cannot afford the luxury to primarily focusing on the big screen. Assume that half of the audience will access the service at least some of the time on a smartphone. Consider launching special features (like supporting video downloads) and content (like short cast interviews) to cater to mobile viewing.

Another thing to keep in mind is how different the smartphone viewing environment is from the television.

Competing for time on mobile is tough

Whereas the focus on a connected TV is always with the video, nothing could be further from the truth than on mobile. According to Nielsen, 80% of time spent goes to non-entertainment tasks. 45% of the time goes to search, portals, and communities (social media.)

On average, about half the time spent consuming entertainment is streaming video and audio, and 36% is playing games. Among the 18-24-year-olds, 70% of the time spent is audio and video streaming.

What’s more, the smartphone user is continuously interrupted by other activity taking place on the device. Facebook and text alerts bombard the user throughout the day and during any viewing session.

To survive and thrive in the smartphone environment, video service providers will need radically different strategies.

17% of US adults access the internet exclusively through a smartphone.

Nearly 2-in-5 consider the smartphone the primary way they go online.

For video providers, supporting the smartphone with unique features and content is a must.