The CTA is expecting 2019 and 2020 to be good years for the connected TV. Smart TVs and streaming media players (SMPs) will jointly shoulder the growth burden, and it looks to stay that way for some time to come. 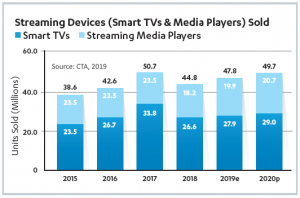 smart TV sales to increase by 5% this year, to reach 27.9 million. Next year, the increase is forecast to be a little less, 4%, with sales reaching 29 million. In 2020, the company says three-quarters of all TV sales will include smart functionality. 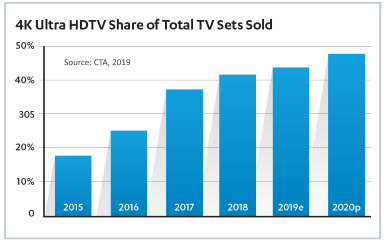 CTA wondered why smart TV sales exceed SMPs despite the latter being an order of magnitude cheaper than the former. The company suggests the reason for the sales disparity is because consumers prefer an integrated experience. There is a far simpler explanation.

Smart TV functionality is simply a part of televisions that people decide to buy for other reasons. Factors like cost, picture quality, brand, and screen size are more influential than smart TV functionality in the buying processes. That’s not to say people don’t want the smart feature. It’s just not a deciding factor in the purchase.

Ultra HD is emerging as a significant driver of smart TV adoption. UHD is now a critical picture quality requirement for many new TV purchasers. CTA expects UHD TVs to make up almost half of TV sales in 2020. Virtually all UHD TV sets also include smart TV functionality.

Why SMP sales continue to grow

A more interesting question is why CTA forecasts an increase in streaming media player sales in 2020 even though it thinks three-quarters of all US TV sales will be smart. If consumers prefer an integrated experience, an increase in smart TV sales should negatively impact SMP sales.

The primary reason SMP sales and penetration continue to grow is that many SVOD providers support them in preference to native smart TV apps. For example, Disney+ will be available on Roku, Apple TV, and Chromecast at launch. However, the only smart TVs that will be able to run the app are those powered by Android TV and Roku.

Moreover, smart TV manufacturers are notorious for ending the support of their older smart TV models. As soon as a user can’t find a service they want or a new version of an app on their older smart TV, they will buy a cheap SMP to get it. The situation is improving. Roku now powers one-in-three smart TVs shipped in the US and has a strong incentive to support them into their old age. The more active Roku users there are, the more people there are to watch adverts on The Roku Channel. Similarly, we can expect Google to provide extended support for smart TVs using its Android TV operating system.

Smart TVs and SMPs will co-exist for a long time

Were all smart TV vendors to power their televisions with a popular TV OS like Roku, we would undoubtedly see a decline in the sales of SMPs. However, that isn’t likely to happen in the short term. Samsung and LG show no signs of giving up on their Tizen and WebOS TV OSs. The only thing that would convince them to do so is if many consumers start preferring TVs that use an independent TV OS. Perhaps large numbers of holiday shoppers asking where Disney+ is on a smart TV they are considering purchasing will start the process.

In the meantime, smart TVs and SMPs will continue to co-exist in the market, both growing and driving the expansion of the connected TV market.

Smart TVs continue to increase in sales because the number of TV models including the functionality continues to expand.

SMPs continue to grow in sales because TV app providers support them in preference to proprietary smart TVs.