Most still can’t watch Ultra HD video over the Internet because their connection is not fast enough. With consumers buying a lot of UHD TVs, will their thirst for the new format reinvigorate disc sales?

Though the stream Netflix provides for Ultra HD is around 15Mbps, the company recommends a speed of 25Mbps. This allows some overhead for other tasks. Unfortunately, new data from Akamai shows that there are not many households with broadband that can support this bandwidth.

In its State of the Internet Report for Q3 2016, Akamai reveals that 8.7% of connections it saw in Q3 connected with an average speed at or above 25 Mbps. The country with the deepest penetration of 25Mbps broadband is South Korea, with 34%. Norway is next with a penetration of 25%, and Hong Kong just behind with 24%.

The U.S. did not make the top 10 countries for adoption of 25Mbps broadband. There is still a very large variation among the states. For example, the District of Columbia saw 30% of connections at or above 25Mbps. Delaware penetration is 26%, and Rhode Island and Massachusetts both had penetrations of 24%. It is, perhaps, not a coincidence that the top 5 states with the highest penetration of 25Mbps connections are all in the top 10 smallest states by land area. Clearly it is easier to connect all the residents of Rhode Island than Montana.

At the other end of the scale, Idaho and Kentucky had the lowest penetration, with 5.9% and 6.1% respectively. In all, 15 States have adoption rates below 10%.

Worldwide the number of connections to Akamai’s network at or above an average of 25Mbps grew 68% year-over-year. Of the top ten countries with the deepest penetration, Singapore saw the biggest growth, 197%, followed by Hong Kong, 78%, and Denmark 66%.

Every State in the Union saw growth in the number of 25Mbps connections. However, some States adoption grew much faster than others. Rhode Island saw a 137% growth, New Jersey saw 117%, and Maryland 101%. Even Idaho and Kentucky saw strong growth, 19% and 31% respectively.

What this means for 4K adoption 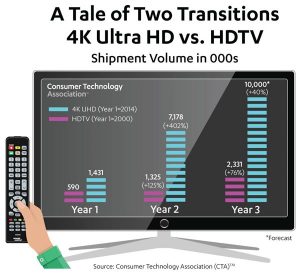 CTA forecasts this year’s 4K TV set sales in the U.S. will be 10M, a 40% increase over last year. Last year there were 7.2M sets sold, and the year before that 1.4M. CTA says that 4K TV sales are growing much faster than HD TV sales did when they were first released. In year 1 of general availability, HDTVs sold 590,000, growing to 2.3M in the third year.

Could this be an opening for the Ultra HD Blu-ray disc format? Player prices are already in the $300 range, and movies like Deadpool and The Revenant are available in 4K for around $30. Signs are that UHD discs are already selling briskly. Mid-year there were 45 movies available on UHD Blu-ray disks, and they had already sold 228,000 discs.

Player makers and content providers should not get over-exuberant over the prospects for UHD disc sales. Physical disc sales overall continue to plummet as SVOD penetration and consumption continues to grow. As well, it could be that many of the UHD TVs sold are to people looking to replace an existing rather than upgrade to the new format.

Broadband with sufficient bandwidth to deliver UHD streams is still not well penetrated.

UHD Blu-ray players and discs are now available at reasonable prices, and sales are brisk.

These two market facts are unlikely to upset the general trends of declining physical disc sales, and increasing SVOD adoption and usage.