Is the lack of local TV hurting Sling TV?

Sling TV’s growth has slowed to a crawl in 2018 while rivals like DirecTV Now continue to grow strongly. Is Sling’s reliance on an antenna for local TV channels to blame?

Sling TV growth slows as others forge ahead

Until 2018, Sling TV had been doing an excellent job at supporting Dish Networks total video subscribers. Dish would lose one or two hundred thousand subscribers; Sling TV would claw back a good proportion of them. So far, 2018 has been different. Sling’s growth has slowed dramatically. In the first quarter, it gained 91,000 and the second 41,000.

Other vMVPDs continue to grow strongly. DirecTV Now launched almost two years after Sling TV, in November 2016. However, its growth has been accelerating. It reached a million subscribers in just one year, and now has 1.81 million to Sling TV’s 2.3 million. It has added 600,000 subscribers this year already.

Other rivals appear to be growing strongly too. In survey data released at the end of 2017, TiVo found that YouTube TV, Hulu Live, and PlayStation Vue all had similar numbers of US consumers saying they were using them.

There are many differences between Sling TV’s approach to the market and other vMVPDs. For example, Sling TV’s entry package, Sling Orange, is at least $15 a month cheaper than all its rivals. It is the cheapest way, by far, to gain access to ESPN. Another difference is that rivals are taking advantage of other services to boost their vMVPD. For instance, AT&T is heavily promoting DirecTV Now by offering a $15-a-month service discount to unlimited wireless customers.

However, one consistent difference between Sling TV and its main vMVPDs rivals is its approach to local channels.

Broadcast channels are still the most popular among television viewers. ABC, CBS, NBC, and Fox consistently rank as the top four choices when consumers pick their ideal channel bundle. That is why most vMVPDs have made providing them a big priority.

YouTube TV said it would not roll out in areas where it couldn’t provide local channels. Now it can offer them to most US homes. Similarly, DirecTV Now, Hulu Live, and PS Vue have been busily adding as many locals as they can (as has the sports-focused FuboTV.) However, local TV coverage remains a patchwork quilt in many services.

Sling TV has struck a different course. It has not tried to bundle the big-four broadcaster’s local TV channels.  There are two primary reasons for this:

Les Moonves, CBS CEO, claims CBS was receiving $4 per subscriber per month from vMVPDs for local channels. Assuming the other broadcasters are close to that number, to provide the four broadcasters would cost $10-$12 per month in license fees.

Rather than pay that, Sling encourages its customers to use an antenna. It sells the AirTV player with ATSC tuner for $50 and integrates local antenna channels into the Sling TV guide.

Is it better to bundle locals at a higher price? 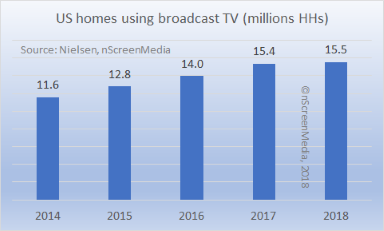 Is Sling’s solution to local TV winning consumers over to antenna use? Certainly, the number of homes using broadcast TV is increasing. Since 2014, almost 4 million homes have started using an antenna. However, just as Sling TV’s growth has slowed, so has the growth in antenna users. Between Q2 2017 and Q2 2018 the increase in antenna homes was very small, a hundred thousand or so according to Nielsen.

Not bundling local channels does put Sling TV at a disadvantage in some situations. When a consumer wants to watch a local baseball or football game immediately, DirecTV Now and YouTube TV may be able to deliver where Sling TV cannot. At the moment of decision, being able to watch the game outweighs the $15 cost difference between Sling TV and the rest. Moreover, requiring an antenna complicates a viewer’s life. For example, recording and viewing local shows is more complicated.

That said, it is not clear if the slow down in Sling’s growth is due to a lack of local TV channels or simply because it needs a more aggressive marketing campaign. Hopefully, Sling TV’s CEO Erik Carlson is looking at how to address both.

Sling TV’s growth has slowed to a crawl in 2018 while rivals like DirecTV Now continue to grow strongly.

One difference between Sling TV and its competitors is that it doesn’t bundle many local TV channels.

A lack of locals puts Sling at a disadvantage in some situations.

However, it’s not clear if the lack of bundled local channels or more aggressive marketing by rivals is to blame for the slowdown in Sling TV’s growth.