The explosive growth of free ad-supported online TV is an opportunity that has been largely ignored by vMVPDs. The one exception is Sling TV, whose Stay in & SLING initiative has been embraced by a sheltering-in-place public hungry for news and entertainment.

It is no secret that ad-supported online TV is experiencing extraordinary growth, which is only accelerating as people shelter in place. However, it is surprising that established online TV providers have not stepped up to participate. Quite the reverse in some cases. Hulu was founded on the idea of free ad-supported viewing but withdrew the option in August 2016. The one exception among the vMVPDs is the founder of the category, SLING TV.

SLING TV launched a free tier of service mid-2018. The initial offering included over a hundred hours of popular TV shows and movies. Since then, the service has steadily added more content to the free tier, including live broadcast channels.

Stay in and Sling

In the face of the COVID-19 epidemic, SLING TV has stepped up the offering considerably with its ‘Stay in & SLING” initiative. Warren Schlichting, SLING TV’s Group President, told me that the idea for the effort came from a desire to help during this time of crisis:

“Stay in & SLING is a nice fit. Watch TV, and you can keep America healthier. It’s fun, and it’s funny, and it’s someplace we can do something. From there, we went to what we want people to do. Stay in and stay safe is step one. Step two is keeping yourself informed, and that’s where an emphasis on live linear news began to take shape.”

The company launched Stay in & SLING two weeks ago, adding ABC New Live along with on-demand kids, lifestyle, and entertainment to the existing slate of free content. The next day, the service added Fox News and Fox affiliates from 18 markets. Earlier this week, the service unlocked its $30-per-month Sling Blue to make it free to everyone through April 5th.

Mr. Schlichting says the company has received many compliments for its Stay in & SLING program. What’s more, it is driving a huge increase in news consumption:

“There is a significant uptick everywhere regarding television watching. But where we’ve focused, there has been a 120% increase in live linear news viewing. And we’ve many, many people take advantage of that <free viewing> with Sling.”

He says people are allowing the news channels to play as they go about their day at home. People are watching for so long, and many are encountering SLING’s “Are you still watching?” message, which appears automatically after four hours and stops the streaming if the viewer fails to acknowledge it. Mr. Schlichting says so many people have called in to complain about the warning they have doubled the time it takes to appear to eight hours.

SLING TV continues to add new content to Stay in & SLING. Zone-TV, a provider of on-demand and linear 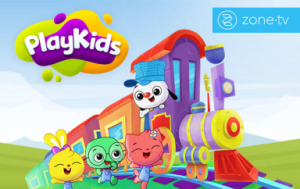 programming to pay TV operators, was scheduled to launch its premium $5 per month Playkids channel with SLING TV. Jeff Weber, Zone-TV’s CEO, says the company will add Playkids to the Stay in & SLING slate of content, making it available for free during the on-going crisis.

Something new is coming for adults too. REVOLT is a premium channel providing live performances and other coverage from the hip-hop music industry from Sean “Diddy” Combs. It will also be available for free for a limited time through Stay in & SLING.

When the crisis eventually passes, Mr. Schlichting says SLING TV will continue to lean into the free ad-supported opportunity online. He views it as an excellent opportunity for everyone involved:

“There is clearly a demand for a free offering. It’s a great chance for us to touch more people, create more relationships, and make money at the same time.”

Once again, SLING TV could be leading where eventually the rest follow.

The explosive growth of free ad-supported online TV has been mostly ignored by vMVPDs.

Providing a good selection of free content can help vMVPDs by::