Can any video service afford to focus on just one screen?

Verizon’s go90 video service has struggled to find its audience. A singular focus on the mobile screen could be to blame. Data shows consumers have multiple devices and use them to watch video. Their video services need to reflect this fact.

At the Code Media Conference in Huntington Beach California, Oath CEO Tim Armstrong talked about the struggles the company has had with go90. The mobile-first ad-supported video service was launched in 2015 but has struggled to find its audience. Mr. Armstrong said that “go90 was a super-ambitious project,” but that it was “sort of off on its own.”

Go90 will no longer be alone. Mr. Armstrong says:

“We had two separate strategies now; now it will be one strategy. We have taken Go90 into Oath.”

The company will now take content that was previously exclusive to go90, from providers such as AwesomenessTV and Vice Media, and distribute through other properties, including Yahoo and Verizon branded services. As to the fate of the standalone go90 service, its future seems cloudy. Mr. Armstrong says, “The brand will remain, I don’t know how long for.”

We are multi-screen people

The biggest problem with go90 could have been its singular focus on the smartphone screen. While many people do favor one screen over another, few use one to the exclusion of all others.

Worldwide, the average internet user owns 3.2 connected devices, according to globalwebindex. Ownership is much higher in markets like the U.S. There are 273.3M U.S. Internet users, according to eMarketer. 214.6M have two devices, an increase of 2% from 2016. 40.7M use only a mobile device to access the Internet, an increase of 11.2%. The number of people relying solely on a PC to access the Internet declined 11.8%, to 17.9M.

Every screen is a television 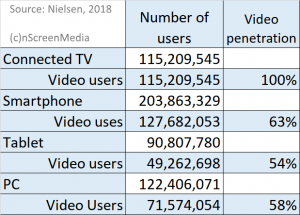 eMarketer says the number of digital video viewers (those watching any online video) in 2017 increased to 221.8M, up 3.1% over 2016. Nielsen data shows that most device owners use them to watch video:

Of course, some screens are used more than others and watched for longer, but all drive meaningful usage. For example, Conviva data from 2016 shows that for premium video content every connected screen drives more video plays at primetime. The PC and connected TV drive the most and the smartphone the least. Conviva data also shows that consumers are very comfortable watching full-length shows and movies on each screen at their disposal.

In an environment where every screen is connected, consumers expect to be able to access all their video services from each screen they use. That’s tough for online video providers. They cannot afford the luxury of focusing just on one screen, as go90 has. They must work seamlessly between every screen.

Mr. Armstrong’s realignment of go90 will open the content to other Verizon services. Hopefully, that will allow viewers to watch the content on any screen they want as well.

A singular focus on mobile devices could be to blame.

79% of US internet users have 2 or more connected devices and most watch video on them.

Video services need to be available on all the screens their customers want to use.