Is it time to switch the Medicare part B and reverse mortgage ads to online services? More older Americans are online, with smartphone in hand than ever before. But most have not put down the TV remote.

Older Americans are connected, just less so than the young 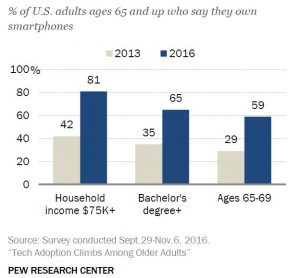 rding to Pew Research, those 65 and older are getting connected, though at lower rates than their younger peers. In 2016, 73% of adults have access to home broadband, while 51% of people 65+ have it. Penetration of smartphones has also grown strongly among adults, increasing from 35% in 2011 to 77% in 2016. The over-65s have also adopted the devices quickly, growing from 11% penetration to 42% in the same period. Tablet usage has grown somewhat less strongly, with 51% of all adults and 32% of seniors using the device in 2016.

So, with most seniors connected and many with mobile device in hand, is it time to start advertising to them video platforms like Hulu and Crackle?

Pew is silent on the usage of video by seniors on their connected devices. For a partial answer to the question we need to turn to Nielsen data for a broader age range: those 50+.

Smartphone video reaches more seniors than any other platform

Nielsen says that video reach of connected devices has increased strongly, with one exception, over the last year among those 50+. Those watching video on their smartphone increased from 24% to 37%. The number using a tablet to watch video doubled in the last year, to reach 13%. And connected televisions reached a third of those 50+ in Q4 2016, a slight increase over the previous year. The only connected device used less for video in 2016 than 2015 was the PC, falling from 34% to 29%. The change in usage for video on each device among seniors is roughly in line with other age groups.

Does that mean content providers should be rushing to market mobile video apps targeting seniors? Perhaps not quite yet, though some experimentation on YouTube might be a good approach.

Smartphone video has the greatest reach among seniors. Though video usage has doubled in the last year among 50+ smartphone video viewers, they still only watch 58 minutes a week on the device. It’s similar story for the tablet, where senior tablet video viewers watch just 53 minutes a week. This suggests seniors are snacking on short form content, in services like YouTube, on the mobile devices, not watching long-form video.

For real engagement, the television remains king. Seniors using a connected television watched 370 minutes a week (over 53 minutes a day) in Q4 2016, up 16% year-over-year. Interestingly, though the number of seniors watching video on their PC as fallen sharply in the last year, the amount of viewing has increased sharply. Seniors watching video on their PC watched 265 minutes a week (38 minutes a day,) up 54% year-over-year.

Unlike other age groups, seniors are not cutting into TV time to watch online video. Nielsen says that television reached slightly more seniors in Q4 2016 than one year earlier. And the amount they watch slipped just 24 minutes per week in that same period, to 2,820 minutes per week (almost 7 hours per day!)

Seniors are getting online, buying smartphones, and watching online video less than younger age groups, but still in significant numbers.