At the Future TV Conference in Denmark on Tuesday, one presenter compared the Swedish and Danish TV markets. One key difference she says is the bigger role for AVOD in Sweden where it is driving more online viewing time. Free ad-supported TV (FAST) could be a great opportunity for local broadcasters to exploit in the US and around the world.

Netflix and HBO Nordic both arrived in Sweden and Denmark at the same time: October 2012. Marie Nilsson CEO of Mediavision observed that online viewing time in Sweden has grown faster and higher than in Denmark. She says that 14% of TV viewing time in Denmark came from online and the rest from linear TV in 2014. In 2018, 35% of viewing came from online sources. In Sweden, online viewing grew from roughly the same (13%) in 2014 to 45% in 2018.

She explained that one of the big differences between the two markets is the prevalence of advertising-supported content in Sweden. Ms. Inglesson says that 60% of the online viewing comes from SVOD services in Denmark and only 25% from AVOD. In Sweden, 50% comes from SVOD and 40% from AVOD. 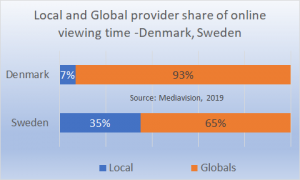 With 70% of all SVOD subscriptions in Scandinavia, Netflix dominates SVOD in the region. However, AVOD in Sweden is predominantly local broadcasters. Ms. Ingelsson says just 7% of viewing time in Denmark is from local providers while 35% is local in Sweden. She told the conference audience of predominantly Danish media professionals that AVOD is an untapped opportunity for local Danish broadcasters

The issue of local content reaching people in the online TV age is a difficult one for Denmark. Earlier in the conference, Julie Nygaard from research firm Wilke made the point that 19% of people rely entirely on online for their TV entertainment. Further, 19% of that group watch no local Danish content at all. A sharper focus on AVOD could help draw the global SVOD viewers back to Danish content.

US local broadcasters beginning to recognize the ad-supported opportunity

Local broadcasters in the US face the same problem. The audience for linear TV and local stations grows ever older. Meanwhile, younger people spend increasing time with National and Global ad-free services like Netflix and HBO. Broadcasters are beginning to act in the US along the lines that Ms. Inglesson is suggesting for Denmark. In an interview with nScreenMedia, Bob Sullivan, Head of Programming, Tegna, had this to say about reaching the audience:

“Our job isn’t just to push out a daily newscast on our broadcast linear stations, but also to go find that audience and provide quality content to them on all their platforms.”

Tegna is doing just that. It has launched a free ad-supported daily news magazine show called the Daily Blast Live and distributes local news on social platforms like Facebook.

Sinclair Broadcasting is starting down the same road. It launched the free ad-supported mobile-oriented STIRR app early in 2019. The app leverages content from the 190 local TV stations the company owns to give app users a uniquely local “channel” within the experience.

As people spend increasing time watching online the opportunity for advertising content expands. The results from Sweden suggest it is an excellent opportunity for local broadcasters around the world to remain relevant to an increasingly online television audience.

Though streaming services came to Sweden and Denmark at the same time, far more TV time is spent online in Sweden than in Denmark.

The much wider availability of ad-supported TV content in Sweden could be a major factor.

Local broadcasters around the world should consider ad-supported online services as a way of reconnecting with TV-disaffected online viewers.