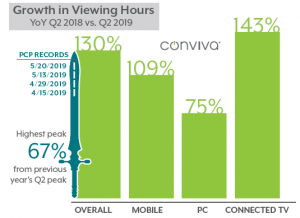 In study after study, the connected TV (CTV) is the growth king for video among connected devices. The latest report from Conviva is a great example. The company saw a 143% growth in CTV viewing hours between Q2 2018 and Q2 2019. CTV users now spend 28.8 minutes watching per video play.

Other screens also grew strongly. Smartphone viewing hours increased by 109%, and the PC increased by 75%. However, viewing times per play are only 12 and 15.1 minutes per play, respectively.

Roku participates in CTV adoption by consumers in two ways. Firstly, it sells sticks and boxes. Reports from Parks Associates and comScore suggest sales of these streaming media players have slowed to a crawl over the last year. Both companies saw a scant 1% increase in the penetration of SMPs over the previous year. However, Roku reported strong growth in player revenue over the last year. It increased 24%, from $66.5 million in Q2 2018 to $82.4 million in Q2 2019. Sadly, profit margins on the players declined over the period, from 22% to 6%. However, in a market where competitors are prepared to sell at cost, any profit at all should be considered an achievement.

Secondly, Roku is a major supplier of smart TV operating systems to OEMs like TCL, Funai, and Hisense. In Q1 2019, TCL became the largest TV supplier in the US, beating out Samsung for the first time. As well, Funai is the 6th largest shipper of TVs. Manufacturers must pay Roku a license fee for each TV they ship with Roku’s OS.

The big win from player sales and licensing is not the revenue both businesses generate. It is the growth in active users they bring. The more people using the Roku platform, the more see ads the service is selling.

FAST services have seen dramatic growth over the last year. Top providers Pluto TV, Tubi, and Xumo, are seeing extraordinary growth. For example, Viacom (Pluto TV’s owner) says the FAST service grew 75% in 7 months, to reach 18 million monthly active users. Other providers, like Tubi and Xumo, are reporting similarly strong growth. As well, the FAST providers are reporting TV-like viewing times of an hour or two per viewing session. Even though ad loads are typically half those of regular TV, with such long dwell times viewers are seeing still seeing 7 to 9 minutes of ads per hour.

FAST providers help Roku’s revenue increase in two ways. The company is selling ads on behalf of some ad-supported services that use its platform. It takes a share of the ad revenue generated by these ad sales. As well, the company runs the most popular FAST service on the platform, The Roku Channel. Roku says the channel is the fifth most popular channel overall, though it doesn’t give out details such as monthly active users.

Robust growth of FAST services has led to an equally strong growth of average quarterly revenue per user (ARPU.) Roku’s ARPU increased 26% over the last year, $16.60 to $21.06, and has almost doubled over the previous two years.

Roku is working hard to capture some the $70 billion TV ad market. It is partnering with advertisers and brands to ensure they see the results for which they are looking. Progress has been slow, but signs are it could be picking up. 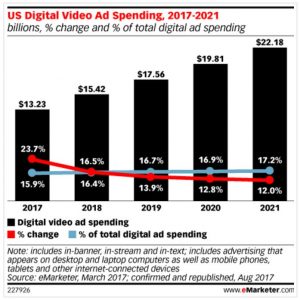 Pixability reports that 58% of agencies say they run campaigns on Roku. Only 27% say they run them with Roku rival Amazon Fire TV. That said, social platforms like Facebook and YouTube still dominate. As well, total US TV ad spending is forecast to shrink 2.2% in 2019 while digital video ad spending will increase by 14%.

The wind is at Roku’s back as the company participates in three growing trends in the market: