One month in and Quibi is struggling to gain smartphone video viewer attention. Jeff Katzenberg, Quibi Founder, blames it all on coronavirus, but there are three good reasons the Quibi weak start has nothing to do with the virus emergency.

To say that the launch of Quibi has been a disappointment is a bit of an understatement. Quibi offered a 90-day free trial in March and April. Anyone with any interest in the content could download the app to their smartphone and start watching for free. After one month, the service claims the app has been downloaded 3.5 million times and has 1.3 million active users. These numbers are a big disappointment to Mr. Katzenberg. The investors, who have put up $1.75 billion to fund the service, can’t be pleased either.

Mr. Katzenberg could not be clearer on the reason for the lackluster April 6 launch:

“I attribute everything that has gone wrong to coronavirus. Everything. But we own it.”

Quibi’s stated audience is young on-the-go viewers who could fill odd moments in their day with the short-form high-quality videos the service provides. Nielsen says that there are over 60 million U.S. adults under-34 that watch video on their smartphone and 112 million under-50. So, the potential audience is enormous.

Is Mr. Katzenberg right, that shelter-in-place orders have curtailed their smartphone video habits and scuppered Quibi’s debut? No, he is not, and here are three reasons why. 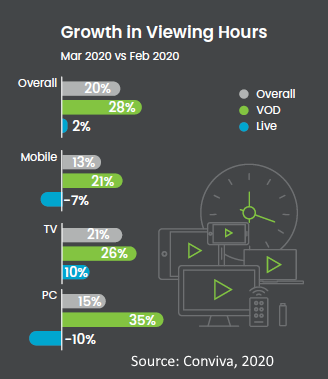 New data from Conviva shows that smartphone video use has accelerated in the first quarter of 2020. The company says that mobile viewing hours increase by 60% between Q1 2019 and Q1 2020. For VOD content, the increase was even higher, rising by 84% year-over-year. No other device, even the connected TV, saw a bigger gain.

Even in March, when shelter-in-place orders were issued in many urban locations, mobile consumption increased. There was a 13% increase in viewing hours between February and March of this year, with a 21% increase in VOD hours viewed.

To be sure, TVs are used far more while sheltering-in-place, but smartphones still enjoy plenty of usage.

Reason #2: Consumers have more time and are more willing to try things out

Quibi has invested a lot of money in promoting the service. The company bought a Super Bowl ad, has been advertising heavily in social media ads and has recently revamped its marketing to account for the dramatic shift to stay-at-home viewing. 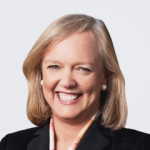 “We did a bit of research, and while people aren’t waiting in line at Starbucks or at the dentist’s office, people do still have those in-between moments: in between Zoom calls, or in between home-schooling the kids, when you’ve got 10 or 15-minutes break.”

Streaming usage has surged to new heights during March and April. Conviva says that peak viewing rose more than 21% higher at the end of March than the beginning. Consumers are also flocking to free trials. Showtime increased its free trial period to 30 days in March, and signups surged 145%.

All the data points to consumers being ready, willing, and able to try out new services with generous free trial periods.

Quibi is competing for odd moments in people’s schedules with social media, especially video social media. TikTok saw an 18% increase in downloads between March 16 and 22, up from 1.7 million in the previous week. 6.2 million people downloaded the app in between March 1 and 23. Video game streaming giant Twitch saw a 31% increase in the two weeks leading up to March 23. YouTube and Facebook also say they have seen a surge in viewership during the lockdown.

When asked about TikTok’s booming growth compared to Quibi’s weak performance, Mr. Katzenberg was not amused:

“To tell me about a company that has a billion users and is doing great in the past six weeks, I’m happy for them, but what the hell does it have to do with me?”

Unfortunately, it has everything to do with Quibi. There are more odd minutes in stay-at-home viewers’ days, and they are choosing to fill them with free social video. All the star power and production values Quibi has are failing to change that fact. Mr. Katzenberg and Ms. Whitman better figure out why, because the clock is ticking. TikTok!