Consumers usually hang on tightly to their treasured entertainment services during times of upheaval and stress. Not so with Comcast. The company saw record losses of video subscribers as service profitability plummeted to new lows. The prospects for the rest of the year look grim.

First-quarter 2020 a tough one for Comcast

The impact of shelter-in-place orders had a substantial adverse effect on NBCU’s business. Revenue plummeted 16% quarter-over-quarter and was down 7% over Q1 2019.  Cable Communications did much better. Revenue from the unit grew 4.5% over Q1 2019, but only broadband and business services made meaningful contributions.

On the face of it, video services fared well, eking out a 0.1% increase in revenue from one year early. However, the underlying trends of the business are ugly. The revenue increase was solely due to a substantial price increase at the beginning of the year. Subscribers declined 477,000, and between Q1 2019 and Q1 2020, Comcast lost one million pay TV customers. Q1 losses were more than three times higher than in Q1 2019.

In the previous earnings call, Michael Cavanagh, Comcast’s Senior EVP & CFO, warned that pay TV price increases would result in higher sub losses in the first quarter. Though people used pay TV far more in March due to shelter-in-place orders, it did not overcome their reluctance to pay significantly more for the service. 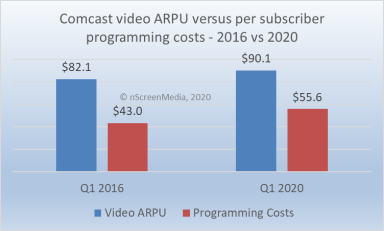 Despite the increase in pay TV prices, the profitability of the business fell to a new low. The rise in program license fees was to blame. In 2019, license fees paid by Comcast fell slightly for the first time in years, declining 0.6%. However, the first quarter more than made up for the 2019 decline, with fees increasing 6% over the previous quarter.

To understand the full extent of the profitability problem faced by Comcast, consider that in the first quarter of 2016, average video revenue per unit (video ARPU) was $82.1. 52.4% of that revenue went directly to programmers to pay for their content. Fast forward to Q1 2020, and video APRU has increased to $90.1, but 61.8% of it goes directly to programmers. Put another way, Comcast’s video ARPU after taking out programming costs is $5 a month less today than it was five years ago.

Triple-play bundle out, broadband-only in

Increasingly, people come to Comcast only for broadband, which is a problem since it is much easier to switch a single service to another provider than three. Comcast’s antidote to the problem is Flex, a set-top box based online TV aggregation product it gives to new broadband customers for free. It needs customers to use Flex if it is to retain some of the stickiness double and triple-play services provide. Peacock is being rolled out to Flex customers to boost interest in using the device. Oddly, Comcast gave no hint as to how Flex is doing with broadband customers. Such a strategically important product warrants much greater attention.

Comcast will experience record losses of pay TV subscribers in 2020, possibly as high as 10% or two million subscribers. The primary drivers for the dramatic acceleration in pay TV defections are: