People love the idea of an accelerated digital release for first-run movies. Comcast/NBCU hopes the premium VOD (PVOD) approach will become permanent. With theaters likely to remain closed for longer than the industry would like, both groups may see PVOD persist for months to come.

Interest in PVOD has never been higher

According to new data from Hub Entertainment Research, with many people unable to go to the movie theater, interest is high in a premium video-on-demand window for movies. In a March 18-19 survey of 1376 US TV viewers aged 16 to 74, Hub asked respondents:

“How interested would you be in a way to watch brand new movies at home for the same price as seeing them in the theater?”

74% said they were very or somewhat interested. Interestingly, those with a heightened sense of caution due to COVID-19 were even more enthusiastic about PVOD. Almost all (95%) of people that know someone with the virus were interested. 88% of parents and 83% of those expecting a drop in personal income were also interested. What’s more, those very interested in PVOD in each group approached half or more, versus a third on the average.

When asked by Deadline what changes might become a permanent part of the way we do business post-COVID-19, Rebecca Heap, SVP of Xfinity Consumer Services had this to say:

“Clearly, we would love to see Home Premieres stay for the industry and for the customer benefit.”

Comcast also owns NBCU, which has been a leader in accelerating the home release window for movies since theaters closed. It brought forward the digital release for movies like Emma and The Invisible Man. While others have shelved releases to a “safer” time, NBCU has pressed ahead. It released Trolls World Tour direct to digital on April 10th, and the move seems to have paid off. The $20 rental generated $2-$3 million on the first day of release in the U.S. and could be headed to outstrip Avengers: Endgame first week of digital availability.

[Update: NBCU says Trolls WT had the biggest opening day and weekend of any digital release. The previous leader was Jurassic World: Fallen Kingdom, and insiders say Trolls did 10X as much business as it.]

The initial success of Trolls World Tour seems to bear out the findings of the Hub survey. It said that 9-in-10 parents are keen on the idea of PVOD. It also suggests consumers are ready for more.

PVOD could persist beyond the relaxation of shelter-in-place orders

The idea that audiences will flock back to theaters once shelter-in-place orders are lifted is looking increasingly unlikely.

Movie theaters will be among the last to receive the green light to open their doors since they are non-essential and put people at increased risk of catching the virus. What’s more, it will take a while for audiences to feel comfortable sitting with a group of strangers for two hours. 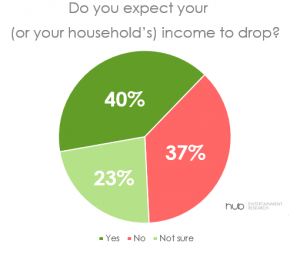 Theatergoers may also be slow to return because their income is lower. Hub found that 40% of people expect their household income to drop. Who can blame them with 16+ million signing up for unemployment in the U.S. in the last three weeks and the world heading into a possible global depression?

With theater audiences remaining weak, no doubt movie studios will stick with the PVOD approach for as long as they deem necessary.

Could PVOD become a more permanent part of the movie business?

In a piece penned before shelter-in-place orders went into effect, nScreenMedia said PVOD would persist only as long as the crisis. However, with restrictions and nervousness liable to drag on for months, it is difficult to say precisely when the crisis will be over. And with each passing day, a return to a “normal” movie theater business seems a little more unlikely.

As they shelter in place, most people like the idea of an early digital release window at a premium price for first-run movies.

Consumers seem to be following through with their interest as the PVOD release of Trolls World Tour looks headed for success.

Since theaters may not open for weeks or months after shelter-in-place orders start to be relaxed, PVOD could persist for much longer than expected.