Peak TV viewing audiences are declining both in the U.S. and UK. While some TV broadcasters point the finger at poor counting of digital distribution, it looks like SVOD is to blame.

Christmas Day is one of the biggest TV viewing days of the year in the UK. New data from BARB, the UK’s television audience measurement company, shows that the audience is migrating away from traditional television. As reported by informitv, the top two channels, BBC One and ITV, have seen many ups and downs in the audience for the top show over the last nine years. However, the underlying trend has been down. 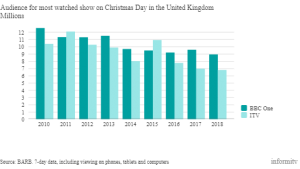 Peak audiences have been waning in the U.S. over a similar period

Though the effect in the U.S. is not as pronounced as in the UK, peak audience certainly seems to be on wane too. According to Nielsen viewing data, the top primetime TV show in 2018 was Roseanne. It attracted a peak audience of 20 million and people 2+ rating of 6.6. In 2011, the top primetime show was American Idol, attracting a peak audience of 24 million and rating of 8.1. In the intervening years, the top show has changed, and ratings have increased in some years and fallen in others. However, the overall trend is toward audience decline.

For the last eight years, the top live event on TV has been the Super Bowl. Looking at the game’s audience, we see the same declining trend as with primetime shows. In 2018, 104 million watch the Patriots lose to the Eagles, generating a rating of 34.2. In 2011, 111 million watched the Packers beat the Steelers, with a rating of 37.7.

It is becoming increasingly difficult to blame the decline in TV viewing on Nielsen and BARB failing to include online views of TV shows. In the UK, BARD includes viewing on phones, tablets, and computers through popular broadcaster apps like BBC iPlayer and ITV+. In the U.S., Nielsen data now includes many of the vMVPD services like YouTube TV and Hulu Live and some broadcaster apps like CBS All Access. Both BARB and Nielsen also include catch-up viewing from DVRs and pay TV on-demand systems.

Of course, people could just be watching less video. However, at least in the U.S., Nielsen data suggests people are watching more video. A more likely explanation is the loss in TV viewing time is transferring to SVOD services.

Hub Research says the average U.S. TV viewer now has 4.5 TV sources to draw upon when they want to watch something. In 2014, they had 3.7. Roku users spend almost 3 hours a day streaming to their device and the average Netflix subscriber streams one hour and 11 minutes per day. With SVOD penetration in the U.S. running at 70% and in the UK above 40%, many people are trading an increasing amount of their TV viewing time for SVOD services.

Peak TV audiences in the UK fell to an all-time for Christmas Day in 2018.

Peak viewing audiences in the U.S. have suffered a similar decline over the last eight years.

The audience appears to be leaking away to SVOD services.