Pay TV and SVOD satisfaction closer than you might think!

ACSI says streaming video service customers are way more satisfied than pay TV customers. Digging into the data shows that when you compare like-with-like, the difference is not so significant.

By now, you have probably seen the headlines, that pay TV satisfaction remains low, and streaming video services rate much higher. These headlines come from the topline findings found in the American Customer Satisfaction Index (ACSI) annual Telecommunications Report 2018-2019. The report does show that SVOD users are more satisfied with their service than pay TV users are with theirs. However, when comparing like-with-like, the difference is not as big as you might think.

ACSI found that overall satisfaction with pay TV services was 62 on a 100-point scale, unchanged from last year. The score places pay TV providers at the very bottom of a list of 46 industries, headed by breweries (85) and Personal Care & Cleaning Products (83), and TVs and Video Players (83.) Scores for individual operators ranged from AT&T U-verse (69) at the top to Altice USA (55) at the bottom.

Pay TV video-on-demand services did a little better. The industry scored 67 overall, a decline of 1.5% over the previous year. Verizon Fios was top with a score of 72 and Charter’s Spectrum was bottom with 64.

The criteria are different for each service type 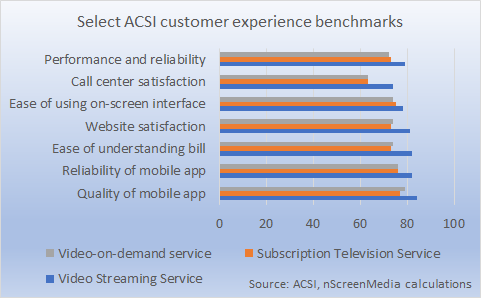 ACSI characterizes satisfaction by asking consumers to score their feelings about 15 or so service features. Those features are not identical between services. For example, categories unique to pay TV include HD picture quality and premium channels availability.[i]

Seven categories were common across pay TV, on-demand, and streaming video services. The average score for video streaming services across these seven categories was 80, and 73 for pay TV and on-demand. In other words, comparing the services by the same criteria shows that streaming users are 10% more satisfied than on-demand and pay TV users.

Where it counts, pay TV and SVOD satisfaction not so different

The most significant difference in satisfaction between Pay TV and streaming occurred in call center satisfaction and ease of understanding the bill. Both are understandable. The only bill an SVOD user sees is a line on their credit bill, whereas a pay TV operator must break out broadband and phone service charges for many customers. As well, when a Netflix or Hulu customer experiences problems streaming, before calling the streaming service, they are more likely to call their broadband operator – which is probably their pay TV operator too.

The smallest difference, just 4%, was in ease of use of the on-screen interface. Pay TV operators should be celebrating performance in this category. Most pay TV operators have a much more difficult task than streaming video providers. They are helping their customers navigate 200+ linear TV channels, large on-demand libraries, recorded content, and in many cases several SVOD services.

When we compare the same criteria between the two industries, the difference in satisfaction is not so significant.

[i] It is not clear why ACSI didn’t ask streaming video providers about picture quality as it would have been entirely appropriate to do so.