Online TV viewers are adding over-the-air television to their viewing mix. However, they watch broadcast TV much less and much less TV overall than other groups. 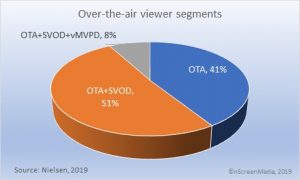 using an antenna to watch television has increased from 11 million in Q2 of 2010 to 16 million in Q2 2018. Almost all the growth in OTA households has come from homes that also watch some form of Internet television.

Today, 59% of OTA households combine broadcast television with some form of internet television services. 51% use SVOD services and 8% add a vMVPD service like Sling TV or YouTube TV. The three groups have very different viewing characteristics, according to Nielsen. However, each also watches a substantial amount of broadcast television. 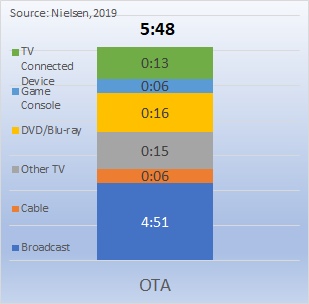 The group relies mostly on broadcast television and doesn’t pay for SVOD or vMVPD services. This group watches the most OTA TV by far, consuming 4 hours and 51 minutes per day. The group also watches the most video of all, with an average of 5 hours and 48 minutes a day.

According to Nielsen, the average age of the OTA only group is 55 years, and their income is $21,000 a year. 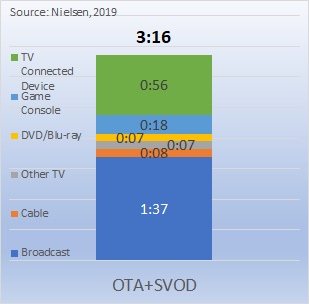 The OTA+SVOD group watches the least TV of all. Traditional broadcast TV viewing is 1 hour and 37 minutes per day, or a third of the OTA only group. They also watch 56 minutes a day through connected TV devices. Total viewing is 3 hours and 16 minutes a day.

Nielsen says the average OTA+SVOD viewer is much younger – 36 years old – than the OTA only group. She also earns more than twice as much, bringing home $44,500 a year.

Over-the-air plus SVOD plus vMVPD

Adding a vMVPD service to the mix boosts TV viewing, though not enough to match the OTA only viewer. Nielsen says the average viewer using 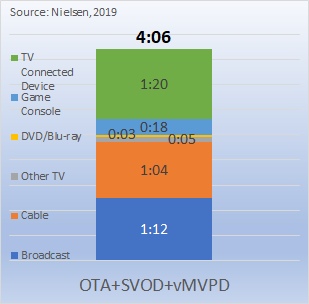 OTA+SVOD+vMVPD is also the lightest user of broadcast TV, watching just 1 hour and 12 minutes per day. The average viewer also watches 1 hour and 20 minutes through a TV connected device and 1 hour and 4 minutes with vMVPDs (which Nielsen classifies as cable viewing.)

I have heard vMVPD insiders comment privately that viewing times for the services are much lower than for traditional pay TV. The Nielsen data seems to confirm these qualitative statements. The typical pay TV home spends more than 4 hours a day with the service. vMVPD users with OTA spend about a quarter of that time. Including OTA broadcast usage, the viewer still spends only have the time with linear TV sources as a pay TV customer.

The data also suggests that OTA and vMVPD services enable people that are spending less time with pay TV and more time with SVOD to cut-the-cord. They can continue to enjoy local sports, and the broadcast and cable shows they love without the expensive pay TV subscription.

The number of people using over-the-air television continues to rise.

Most of the increase is coming from consumers that also watch online.

People that combine OTA with online TV services watch much less linear TV and much less television overall than those without online television services.