According to Nielsen the slide in live viewing continued in Q2 2015, down another 4% year-over-year. And it looks like the DVR is not making up the difference. That on-demand viewing time appears to be going OTT.

In Nielsen’s new Q2 2015 Total Audience Report the company changed how it was presenting the data. On the whole this makes it easier to differentiate between data averaged over all U.S. consumers and data for users of a particular entertainment medium or device. 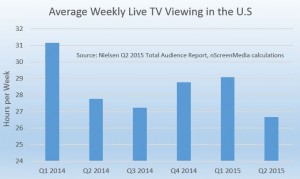 Looking at the data averaged across all consumers first, live TV viewing fell 4% over Q2 2014, dropping to 26 hours and 40 minutes a day (3 hours 49 minutes a day.) This follows an even bigger decline in live viewing in the first quarter of 2015. Average viewing fell 5.7% year-over-year in that quarter.

Though DVR penetration has now hit 50% in the U.S., it appears the device is not able to arrest the decline in traditional TV viewership. Live plus DVR viewing also fell, by 3.4% YoY, in the second quarter and by 5.7% in the first quarter. The increase in DVR viewing between Q2 2014 and Q2 2015 was just 3 minutes a week and the decrease in live TV viewing over the same period was 1 hour and 6 mins. Since the total amount of video device viewing time remained essentially flat over the period, it looks like the balance, 1 hour 3 mins, has transferred online.

Examining Nielsen’s data for users of a particular video medium or device allows us to see more clearly where the fall in live TV viewing is going.

Simply put, all traditional TV and movie mediums declined in usage in the second, and all connected platforms increased strongly.

Game consoles appear to be enjoying a renaissance in usage.  Xbox and Playstation owners used their devices 17% more last quarter than in Q2 2014. However, it’s not clear the increase has anything to do with increased video consumption. The release of the new PS4 and Xbox One consoles has sparked the creation of many new games, which are probably resulting in more game play. It’s interesting to note that, according to Nielsen, penetration of game consoles has remained flat over the last year, at 46%, indicating most of the new console sales are to replace an existing device, rather than driving an expansion of the video game market.

Live TV viewers continues to decline in the U.S.

Though DVR usage is increasing, only a small portion of the decline in live viewing is transferring to the device.

The bulk of the decline in live TV viewing is transferring online, to OTT video consumption through connected devices.