Authenticated ad views are growing, being pushed along by OTT live sports, according to the Q3 2014 Video Monetization Report from Freewheel. It looks like sports is just as valuable to TV Everywhere as it is to the core pay TV package.

Where is all this additional long-form inventory coming from? Two big, related sources dominate: authenticated programmer content and the availability of live sports events online.

Q3 2014 saw a 214% year-over-year growth in live video ad viewers, with live now accounting for 21% of all video ad views for programmers. And live is totally dominated by sports. 82% of live ad views were in live sports programming, with just 11% in news and 7% in drama, comedy and reality. Live sports became more available online over the last year. Launches of authenticated services such as Fox Sports Go and NBC Sports Live Extra dedicated to live sports help to bring more sports events than ever online. And there were some big events in Q3, like the World Cup and season starts for NFL and Premiere League Soccer.

The PC remains the most popular screen for OTT video viewing. Ad views grew 20% year-over-year (YOY) to the device, though its overall share of views fell to 73%. The smartphone continues to transition to a serious video consumption device, with ad views growing 77% resulting in an overall share of 14%. However, the biggest growth in ad views goes to the biggest screen in the home, television. Freewheel reports a 208% increase in ad views to OTT devices (Roku, Apple TV, Chromecast etc.), resulting in a 6% overall share. 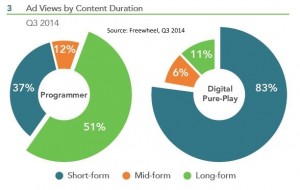 This data is a graphic illustration of the importance of the television for long form content. For digital pure-play services short form content dominates, occupying 83% of the time spent watching. For online programmer content, viewers spend 51% of their time watching long form content.

With authenticated viewing, the impact of sports is also evident. 56% of authenticated viewing was for live content in Q3 versus 44% for on-demand. And sport may also be a critical component in the introduction of on-demand authenticated content to pay TV subscribers. Freewheel reports that 76% of TV Everywhere viewing was for live content in Q4 2013. Seems that subscribers are drawn to TVE by the lure of a sports event and stick around to catch up on their favorite show after the final whistle.

The 30% growth in ad views online is being driven by live streaming and, in particular, by sports streaming.

Over half of authenticated content is long form content, including live sports, and is mostly watched on PCs and TVs via OTT devices.