New data shows video streaming adoption is driving explosive growth in broadband bandwidth consumption. It can also lead to consumers unwittingly exceeding the limits of their broadband package. A new tool from OpenVault can help ISPs reach consumers with an upgrade offer before problems arise. 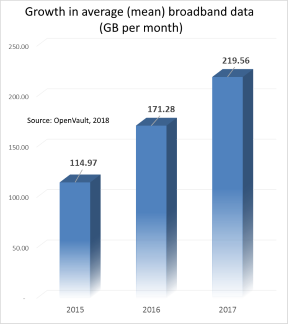 The shift to online viewing is driving a massive increase in the consumption of broadband bandwidth. According to OpenVault, a provider of analytics and technology solutions for broadband operators, average (mean) data consumption has increased from 115 Gbytes per month per customer connection in 2015 to 220 Gbytes per month in 2017.

The data confirms that the growth in video streaming is happening broadly across the broadband customer-base. With a forecast of 5 million new cord-cutters in 2018, the growth is likely to accelerate.

Keeping up with the explosive growth of broadband data is causing problems for both ISPs and their customers.

Broadband users don’t understand the limits of their service

For broadband customers, simply switching from satellite or cable television to a vMVPD like Sling TV or DirecTV Now can have a dramatic impact on the performance of their service. For example, 25 Mbps broadband may no longer be enough to support everyone in the home watching different channels at the same time. What’s more, users may not be aware it is lack of broadband speed that is causing terrible streaming performance.

As well, an AT&T or Comcast broadband customer may come perilously close to their 1 Terabyte cap. Someone watching a normal amount of television on a vMVPD like Sling TV would consume over 400 Gigabytes (GB) per month or 40% of a 1TB cap. Assuming the average U.S. home consumes 9 hours per day of total HD video streaming, by the end of the month it will use over 80% of the cap.

With the increasing use of UHD streaming, it is easy to see how a broadband customer can break the broadband barriers of both the speed and bandwidth caps.

OpenVault helps ISPs identify customers in need of an upgrade 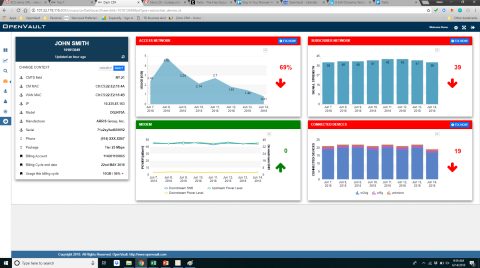 approaching their broadband cap. However, OpenVault is looking to change that. It has just announced a new product called Revenue Accelerator to help ISPs identify customers that can benefit from upgraded broadband service.

Revenue Accelerator analyzes broadband usage data to help ISPs understand the upgrade potential in their network. It then identifies the best candidates for upgrades, so ISP sales staff can contact the customer and advise them on a broadband package that will better meet their needs. According to Mr. Trudeau, the tool can help ISPs grow revenue 15-20% within three years.

There is another benefit to ISPs for proactively targeting customers reaching the limits of their broadband tier: reduced support calls. When a customer’s video quality degrades because of insufficient speed or she receives a broadband bill with overage charges, she will certainly call the ISP.

A customer adopting a vMVPD or SVOD service may not appreciate the impact the increase in video streaming will have on their broadband connection.

Insufficient broadband speed can lead to poor video quality, and too low a bandwidth cap can lead to nasty shocks when the bill arrives.

There is a new tool that will help ISPs identify customers nearing the limits of their broadband package and allow the ISP to target them proactively with an upgrade.