Opening the STB not enough to save big pay TV bundle

Operators are looking for ways to combine pay TV with the online video services their customers are using in an open set-top box environment. However, if they are hoping the approach will save the big bundle they are mistaken.

The idea that traditional pay TV services can stand apart from online video services seems to be fading fast. Operators both big and small are starting to bring popular SVOD services into the pay TV fold and deliver them to their subscribers on the managed set-top box.

Nothing illustrates this trend better than the advance of Android TV as a viable platform to bring the pay TV and online video worlds together on the operator set-top box. Google’s operator tier client was very much in evidence at NAB 2018. The company had a sizable booth in South Hall at the Las Vegas Convention Center that attracted a continuous stream of interested show attendees.

However, what caught my eye was that operators are beginning to deploy Android TV to their customers. At an Amino-hosted event, Finish operator DNA discussed how it had worked with Amino and Google to launch Android TV. Ville Partanen, Director of Product Development Entertainment Business for DNA, discussed how the operator was already seeing a big competitive advantage having the solution in the market.

The trend toward Android TV, and platforms like it, is an important step for pay television operators. It illustrates a growing acceptance that customers are using online video services in addition to pay TV. Moreover, operators recognize the more time a customer spends away from the operator set-top box, the higher the probability that the subscriber may cut-the-cord.

If operators are hoping that opening the set-top box to online video will save the big bundle, they will be disappointed. The business model that supports the pay TV industry as we have known it is broken. 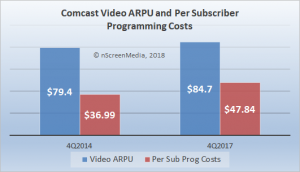 Consider the plight of another operator participating in the event hosted by Amino. Emily Schierberg, Director – Video and Applications at Cincinnati Bell, said that the TV channel and content license fees paid by her company to TV content providers increased a jaw-dropping 30% last year. Needless to say, Cincinnati Bell was unable to raise pay TV rates anything like enough to cover the increase in license costs. In other words, the operator suffered a massive reduction in profitability for its pay TV business.

Even a monster operator like Comcast cannot contain the huge license fee increases. It has seen 10% margin erosion since 2014.

On another panel at NAB, Robin Flynn, a senior Kagan analyst, and I were asked by an audience member if content providers would moderate their demands for higher fees to preserve the big-bundle approach. We both agreed the demands for huge fee increases would continue. The reason is simple: TV programmers see no reason to do so.

Simply put, the fundamentals of the big-bundle business model are broken. Opening the operator STB may slow cord-cutting in the short term, but it will not stop.

For those operators that opt to open the set-top box, there may be a second act: solving the mounting complexity faced by consumers in juggling multiple video services. How operators can monetize this emerging opportunity is unclear. However, providing an open set-top box to subscribers may give an operator time to figure it out.

The approach may slow cord-cutting, but it will not save the big-bundle pay TV package.

Market forces have broken the economic model that underpins the big bundle.