New data shows that online TV – in the form of SVOD and ad-supported services – widened and deepened its adoption in 2019. With the release of new services like Disney+, Peacock, and HBO Max, expect online TV stacking and penetration to accelerate this year. 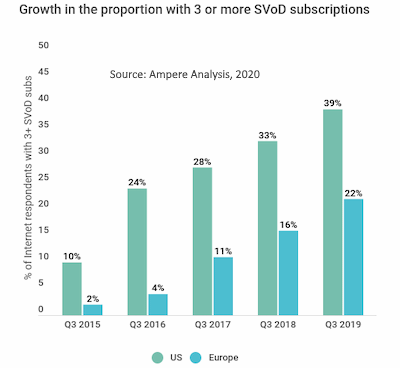 Leichtman Research has documented a similar trend. The company says that the number of U.S. homes with two or more SVOD services in Q3 2019 was 51%, up from 43% in the previous year.

The penetration of SVOD services in the U.S. sits somewhere between 72% and 74%. Leichtman Research pegged penetration at 74% in August of 2019. HarrisX says penetration was 72% in October of 2019.

Creating a custom video package is nothing new for consumers. Many have been doing it without thinking for years. Consider that, according to TiVo’s latest Video Trends Report, three-in-ten U.S. consumers watch videos from Netflix, YouTube, and Facebook. A quarter use Netflix, pay TV, and YouTube, and one-in-five watch Netflix, YouTube, and free video sources like Pluto TV and Xumo. 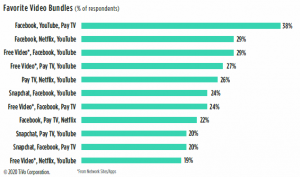 Towards the end of last year, there were reports that consumers were very likely to cancel one SVOD service to sign up for another, like Disney+. So far, at least, they do not appear to be following through on this threat.

HarrisX data shows that nearly 20 million U.S. households used Disney+ in December and that 90% of those homes also subscribe to Netflix. What’s more, 41% of the Disney+ homes streamed content from the new service every day. However, beyond The Mandalorian, there is little new content for people to watch. For something new, they need to flip back to Netflix, which debuts around 35 new shows a week around the world.

There will be an acceleration in online TV adoption in all dimensions this year: