Adobe’s new Q3 2015 Video Benchmark shows those that have found TV Everywhere are using it more, but growth in users has slowed to crawl.

According to Adobe, usage via authenticated sessions has increased 102% year-over-year, and 37% quarter-over-quarter. Unfortunately, growth in the number of pay TV subscribers using TVE has slowed dramatically over the last year. The number of people authenticating at least one viewing session in Q3 increased just 1%, to 13.6%. 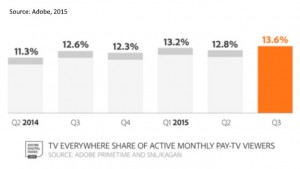 Compared to SVOD, TV Everywhere growth looks anemic. Digitalsmiths says the number of SVOD users grew to 56.3% over the last year, up 3.8%. TVE growth looks even worse when you consider that the industry ran a big promotional campaign mid-Q3 aimed at getting more people user online pay TV services. 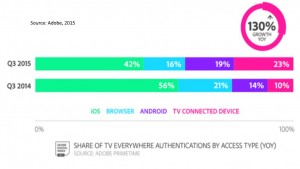 Ironically, TV Everywhere users are increasingly seeking to watch on the television, despite having access to the same content through their operator set-top box. Connected TV share of authentications increased 130% year-over-year. Apple TV and Roku account for 87% of all connected TV accesses.

It also looks like parents have discovered TVE could be a great way to get the kids off the main TV, freeing it up for them. Teens and Toons content accesses increased 46% in Q3 over Q2, and this content category now accounts for three-quarters of all show access through TVE. Kids are also mostly using mobile devices to watch, with Android devices used twice as often as Apple iOS products.

This slow growth must be frustrating for operators. However, help could be at hand. Sport has been a key driver in recruiting new TVE users. There were no major events in 2015, but the Rio Olympics in 2016 could be just what the doctor ordered to get TV Everywhere growing again.