New reports from three companies show that the growth in usage of media caused by the COVID-19 pandemic seems to have settled in at an elevated level. Smartphones are being used much more for all media tasks. News consumption remains at historically high levels while sports viewing has reached historic lows.

You can choose to watch my video rundown of the data or read the details below. 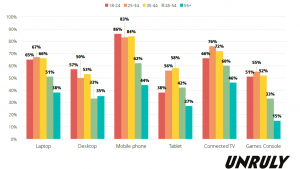 Unruly, a video ad platform, surveyed 2500 people in six countries in March to understand how their usage of media had changed due to the crisis. It found 83+% of 18-44-year-olds said they were using their smartphone more or much more. Connected TV was the second most popular screen, with 60+% of 18-44s saying they were using it more.

Chapter 2: Sports viewing plummets with no end in sight (2:39) 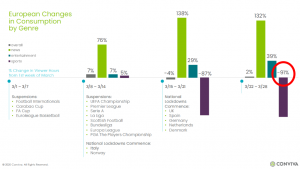 has plummeted 91% since the beginning of March. Given that just about every major sports league and tournament shut down in Europe in the first two weeks of March, such as steam decline is not unexpected. There is no end in sight to the live sports shutdown.

Alphonso plumed real-time smart TV viewing data from 15 million U.S. HHs in March. It found that 24-hour news channels saw a 20% increase in usage due to Super Tuesday on March 3rd. However, the viewing did not return to normal on March 4th. Instead, it continued to climb as the COVID-19 emergency deepened, reaching 70% above average on March 24th. Viewing levels for the rest of March settled to about 55% of normal, with no 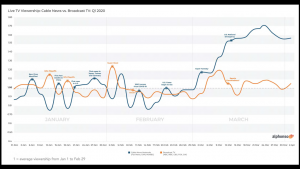 It is interesting to note that broadcast TV channel viewing remains at about the same level as before the crisis.

OTT usage multiplied to 20% of normal between March 16 and 23. Since then, viewing has settled at about 25% above average.

As the COVID-19 crisis drags on, there is plenty of time for viewers to learn new habits. It could be that OTT viewing since it is focused more generally than TV viewing could remain much higher than it was before.