Interview: Pluto TV in this time of crisis

Many people are turning to Pluto TV in this time of crisis. News, already the services most popular category, has seen channel usage increase 100% in just 21 days. Will the increased usage persist after life returns to normal?

In the first episode of Let’s DEW Lunch, the new daily live webcast from Digital Media Wire, I interview Jeff Shultz, EVP and Chief Business Officer of Pluto TV. The free linear TV service is at the center of the explosion in ad-supported online viewing. It was purchased last year by Viacom, which in turn, merged with CBS late in 2020.

I talked with Mr. Shultz about how the on-going COVID-19 crisis is impacting Pluto TV. A heavily edited version of the conversation is shown below. The full 30-minute interview is available from Digital Media Wire.

Pluto TV and the COVID-19 crisis

nScreenMedia: How are things going with Pluto TV during the COVID-19 emergency?

Mr. Shultz: “We just finished our third week of week-over-week double-digit increases in both usage and users. Pluto is particularly well suited for this scenario in a couple of ways. One is information. Pluto has 20 news channels, and the majority of these are true live news channels. When people are seeking information regarding the development and their own safety, we have a natural opportunity to help them understand more. And that’s both nationally and locally. There are channels for both CBS New York and CBS LA.”

“That usage spike that I mentioned, we’ve experienced it across the board, but it is concentrated in a couple of places especially. One is news. News has grown 100%, more than doubling in usage over the course of the last three weeks. And it was already one of the most consistent categories. But you can’t watch news all day. It’s things like the binge-watch channels that we have, which are deceptively popular. Bay Watch, Leverage, Unsolved Mysteries, and counter-intuitive examples like This Old House and Antiques Roadshow, these <channels> are running 24-hours a day. People will discover them in the linear guide and end up watching for hours. It is one episode after another after another.”

nScreenMedia: “I’ve heard that as much as $2 billion in Sports ad money is looking for a new home. Has Pluto see any of it?”

Mr. Shultz: “While we are experiencing some of that, it is offset by other dynamics. Some of that could be macro, meaning dollars continuing to move to OTT and connected TV in particular. It could be that those dollars may wind up being the last to be cut because they’re seen as high-performance dollars. It could be something more specific, like sports dollars needing a home and Pluto being one of the hyper-growth and high-value places to put some of those dollars.”

How ViacomCBS is leveraging Pluto

nScreenMedia: “How is ViacomCBS using Pluto TV as a distribution platform for its content?”

Mr. Shultz: “We launched a version MTV, a version of Comedy Central. These are out-of-window shows, at least 18 months old. It’s a segmentation of the shows you would see on the premium cable channels, but it’s great content. In total, we launched over 50 of those channels. Some of them are OTT Pluto versions of their cable counterparts. Some of them are things like The Hills channel. This was timed with the launch of the reboot of Hills coming to premium cable, not available on Pluto. We launched a 24×7 channel reminding people that they cared about those characters and that storyline and then very overtly throwing to the premium season. A great example of how ViacomCBS can generate increment revenue and audience from Pluto and tie into the other business models within this price-point segmentation.”

“We did another one debuting Picard in support of the new series on CBS All Access. There was a day when our Sci-Fi channel was Picard running 24 hours a day. Hundreds and hundreds of thousands of people watch that show on Pluto. If you liked it, there was only one way to episode two; that was subscribing to CBS All Access.”

Will behaviors and viewers persist after the crisis is over?

nScreenMedia: “It takes about six weeks to make a new habit permanent. Do you think that after the crisis has passed, it will have been long enough for the new viewing behaviors and new users to stick?”

Mr. Shultz: “What the crisis is doing, what the situation that people find themselves in is doing is pushing more people in the funnel. It is exposing more people to the value of Pluto. But the proposition is pretty simple, and I doubt that in the case of Pluto, it takes six weeks to make it permanent. My shorthand for Pluto has always been ‘free and instant.’ We don’t ask you to log in, and we don’t ask you for any of your information, and we certainly don’t ask you for any money. Oh, and by the way, you don’t have to decide what to watch. You can just stumble upon something.”

“The magic to Pluto’s growth is finding ways to get people to experience that lack of friction, that delight of finding something they didn’t even know they wanted to watch. What’s happening right now is that Pluto is being exposed to more and more people, and I don’t’ think that the free-and-instant proposition becomes any less valuable the day that the all-clear is sounded. The exposure that we’ve gotten, the new users that are acquainted with Pluto, I do expect that to stick.” 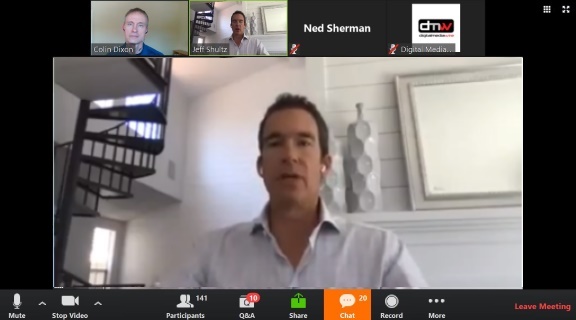