Despite the fact that the vast majority of consumers had no idea what cloud storage was just 3 years ago, today at least 30% of U.S. broadband users are already using it. How could such a young industry grow so quickly? 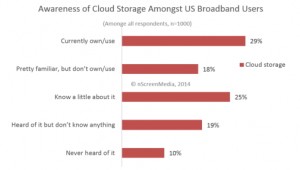 According to a report from nScreenMedia, the number of U.S. broadband users aware of cloud services to store files is an amazing 90%. 19% have simply heard of the technology but know nothing about it, while 43% know at least a little about it. 29% say they are using cloud storage, although it is likely that number is an underestimate of the actual number of users.

The impressive awareness of cloud storage services is almost certainly due to the close ties the technology has with devices and services consumers commonly use. Many devices come preconfigured with cloud storage, and consumers are asked to enable it during the first use set up script. This gives me reason to believe that more consumers are actually using cloud storage than the survey results would suggest. Since consumers often set up cloud backup when they first use a device, many likely don’t remember they enabled the functionality.

Services such as iTunes and Amazon are also helping consumers adopt cloud storage. When I installed Amazon’s cloud player I was pleasantly surprised to discover that a digital copy of every CD I had purchased was already available in cloud player. This, of course, happens automatically when a digital song is purchased through iTunes.

With consumers expected to increase their downloaded song libraries by 29% in the next year, no surprise that the majority of this content will also be stored in the cloud. 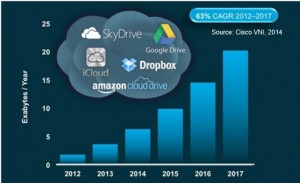 The dynamics driving the adoption of the cloud storage by consumers are leading some to forecast aggressive growth over the coming years. For example, Cisco is forecasting 63% CAGR (compound annual growth rate) for personal cloud traffic through 2017. This traffic, the company says, is primarily to cloud locker services such as iCloud, Google Drive and OneDrive (formerly named SkyDrive.) Gartner is similarly enthusiastic about the cloud storage market size. The company forecasts that consumers will store 36% of their digital content in the cloud by 2016.

The success of cloud storage is forcing other parts of the industry to rethink the strategic approach to the market. Network Attached Storage is only catching on slowly with consumers, despite being available for a decade or more. Companies like Western Digital are looking to leverage the high awareness of the cloud as a storage medium to give NAS a consumer makeover. The company launched an advertising campaign for its NAS product called My Cloud, stressing the benefits of home storage over the cloud.

Consumer cloud storage services are relatively new in the market (iCloud was launched in 2011.)

Already 90% of broadband users know about the technology, and 30% are using it.