Netflix subscribers in the zeitgeist!

Netflix’ strong 2018 results show the money the company is pouring into content is paying off. To illustrate how the strategy is working, executives trumpeted the company’s star-making power. They also suggested those without Netflix are outside the zeitgeist!

2018 was another banner year for Netflix

Netflix is forecasting slowed growth in Q1 2019. The company anticipates growing subscribers 24.6% year-over-year (YoY) versus 26% one year ago. The price increase in the U.S. – $2 a month more on the most popular plan – could be the reason the company lowered its forecast. However, most analysts, including those at nScreenMedia, do not expect the price increase to impact Netflix’ growth in 2019 materially.

Why are analysts so bullish on the company? The massive content spending is delivering big growth for the company, and in 2019 Netflix shows no sign of slowing its content spend. Netflix went to great pains in the quarterly financial call to emphasize how well it is spending the money.

In the quarterly shareholder letter and the quarterly results call, Netflix executives took time out to illustrate the power that comes with having nearly 150 million customers.

Ted Sarandos, Netflix Chief Content Officer, talked about how good the company has become at creating content that millions of people want to watch:

“Our ability to create hits and create movie stars and TV stars from anywhere in the world for the rest of world is something that we’ve really been working hard on.” 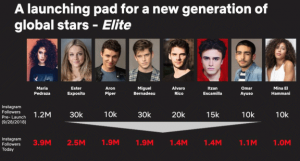 The shareholder letter was more specific about Netflix’ star-making ability. It cited the impact being in a Netflix production had on actors that were previously little known. For example, over 20 million-member households around the world watched the Netflix Spanish original Elite. One of its stars, Ester Exposito, had just 30,000 Instagram followers before the launch of the show on September 28th, 2018. Ms. Exposito now has 2.5 million followers.

No Netflix, no zeitgeist

Mr. Sarandos continued to beat the drum of the power of Netflix, citing the success of the Netflix Original movie Birdbox with Sandra Bullock:

However, it has been a long time since scripted television delivered audiences of 80 million. Peak TV shows recently have driven audiences that are only a fraction of the size of the top shows in the ‘70s and ‘80s. However, Mr. Sarandos could have a point. Maybe peak viewing – or at least big audiences – have transferred to online service like Netflix. Mr. Sarandos pressed his point even further:

“For part of your Netflix subscription, you’re in the zeitgeist. You’re watching what the rest of the world is loving at the same time.”

Pressing the pedal to the metal

Netflix shows no sign in letting up on its massive spending on content. With Disney and WarnerMedia entering the market at the end of the year, now is not the time to be trimming spending. Moreover, while the spending keeps delivering 26% growth in paying customers, there is no reason to stop.

“In unscripted, the majority of viewing is branded original.”

All of this means Netflix subscribers will continue to find plenty of new original shows for at least the next year or so.

Netflix continues to grow strongly, even in mature markets like the U.S.

The growth is due in large part to the huge amount the company is spending on content.

The company went to great pains to emphasize it is spending its money wisely.