Netflix penetration exceeded 50% in the U.S. for the first time in Q2 2020, driven by extraordinary growth due to shelter-in-place orders. An uninterrupted flow of new content is a big reason people continue to flock to and stick with Netflix. Its controversial practice of dropping all episodes of a show at once helped it prepare for and prosper in these exceptional times.

[Listen to a podcast with nScreenMedia and VideoNuze discussing the Q1 results and outlook for Q2 and beyond.]

Before the COVID-19 crisis, Netflix had been on a dramatic slowing trend in the U.S. It lost subscribers for the first time in the second quarter of 2019 and added just 400,000 new customers in the traditionally strong fourth quarter. Absent the C-19 crisis, Netflix might have taken a year or more to cross the 50% penetration mark. Moreover, with growing competition from Disney, AT&T WarnerMedia, and NBCU, who can say the company would have reached half of U.S. households at all?

However, stay-at-home orders in the U.S. and across the globe in March and April changed everything.

Netflix’s massive investment in content afforded it a unique advantage as consumers hunkered down at home in March. The 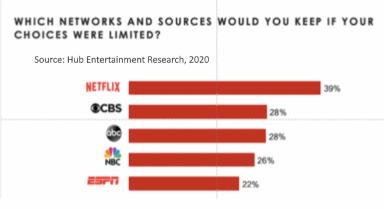 constant flow of new and quality originals has become a crucial part of Netflix’s allure, according to Hub Entertainment Research. Nearly a quarter of U.S. adults say the SVOD service has the best originals, with second-place finisher Amazon Prime Video cited by just 6%. What is more, 39% say Netflix would be the entertainment source they would keep if choices were limited. CBS was second place with 28%.

As production on daily talk show and live sports ground to a halt in March, TV broadcast executives were left scrambling to fill their schedules. To be sure, many people turned to 24-hour TV news to fill some of that newly liberated viewing time. However, they also turned in droves to Netflix for fresh entertainment choices, and there were plenty to be found. The company drops up to 35 new shows and movies a week.

New titles like Tiger King and Spenser Confidential helped drive the exceptional growth in U.S. subscribers. Those and other titles helped to generate a massive boost in engagement. Nielsen says the average U.S. connected TV home increased time spent with SVOD services by 50% between February 24th and March 30th. What is more, Netflix expanded its market-leading share of connected TV viewing minutes from 31% to 33% over the same period.

A sustainable advantage in Q2 and beyond

With content production at a halt, TV networks also face the prospect of mid-season shows running out of episodes before the season is done. If production does not resume soon, the 2020/2021 season could be devasted as well. Not so for Netflix, according to Ted Sarandos, the company’s Chief Content Officer. He was asked during the Q1 2020 results analyst call if he would slow down the delivery of new shows to make them last through the crisis. He did not think that would be necessary:

“We work really far out relative to the industry because we launch our shows all episodes at once. And we are working far out all over the world. So, our 2020 slate of series and films are largely shot and are in post-production remotely in locations all over the world. And we are pretty deep into our 2021 slate. So, we don’t anticipate moving things around.”

Many have questioned Netflix’s practice of dropping all episodes of a show at once. The frightening speed at which COVID-19 overtook us shows a hidden advantage of the approach. It forces discipline and schedule on the production process that requires much longer-range planning than is typical for the television industry. Competitors like Disney+ and CBS All Access should pay close attention.

Netflix executives repeatedly stressed that it and everyone else in the industry are navigating uncharted territory. The company forecasts a return to more regular pre-COVID-19 subscriber acquisition and viewing patterns in the second quarter. That said, according to Mr. Hastings, it is hard to know when things will return to normal:

“We too are really unsure of what the future brings. It’s super hard to say if there are strategic long-term implications because we’ve just been scrambling to keep our service running well, to keep the content, get our post-production done.”

At least from the standpoint of content, it is hard to think of a company better positioned to weather the storm than Netflix.

Netflix has boosted subscribers and viewing time at a record pace in Q1 2020.

As television content vanished due to production halts and sports cancellations, people gravitated to Netflix to find something new to watch.

The constant flow of new shows and movies into the service – which is no danger of slowing down – is a big reason Netflix is attracting and keeping viewers.

The service is well-positioned to continue to dominate the SVOD space throughout 2020 and beyond.