Last week Netflix ldelivered a raft of data on how people are using its market-leading SVOD service. By the looks of things, the first Sunday in January should be declared World Video Binge Day.

The data released by Netflix last week reveals a great deal about how SVOD is reshaping our viewing habits. Here are four key facts to illustrate the changes.

Perhaps it is the post-holiday blahs that puts us in the mood to binge. Last year Netflix revealed that its busiest day streaming ever occurred on Sunday, January 8th, 2017. On that day, the company streamed 250 million hours of video to the 94 million subscribers. In other words, on that day the average Netflix subscribed account watched 2 hours and 30 minutes of video.

The company just reported it broke its single-day streaming record, once again on the first Sunday in January 2018. On that day, Netflix streamed a total of 350 million hours to the 118 million subscriber accounts. The average subscribed account streamed 28 minutes more than the same day in 2017, for a total of 2 hours and 58 minutes.

Netflix says that its members accessed the service through 450 million different devices in February. In other words, the average subscribed account was used from 3.8 separate devices during February. Does that mean that people are using four devices to access their account? No, but they are probably using the home connected TV and their personal device. 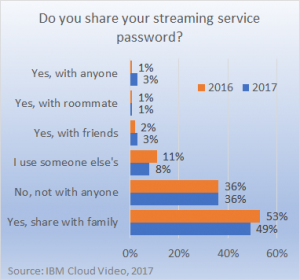 About 3-in-5 U.S. SVOD users say they share their password with someone else. However, most of the sharing takes place within families.  The average U.S. household has 2.6 people in it, and all of them probably have access to the household Netflix account on their personal device.[1] So, including the main TV, the average U.S. Netflix subscription is accessed from 3.6 devices (1 TV plus one device for each of the 2.6 people in the average home.)

Ted Sarandos, Head of Content at Netflix, has repeated many times that the company looks to create local content that has International appeal. Last year he pointed to the release of Okja, a Korean film, as evidence that strategy was working, though he did not provide specifics:

“We make a fantastic movie for Korea <Okja,> but it’s an even bigger story that the movie is getting watched by millions around the world.”

Last week, Netflix’ Chief Product Office Greg Peters, said that 90% of the viewing of the show Dark, a German time-travel drama, occurred outside of Germany.

Last week I reported on Vimeo data that showed a big difference between the platforms people signup on and then use to view the video. Netflix confirms these findings and, in the process, shows just how TV-oriented the service is. 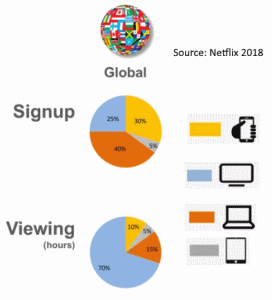 Globally, the most popular platform to signup from is a PC or laptop. 40% of signups occur there, 30% on a smartphone, 25% on a connected TV, and 5% on a tablet. When it comes to streaming Netflix video, the television dominates. Globally, 70% of viewing hours are on a television screen. The PC is a very distant second, with 15%, the smartphone third (10%) and the tablet last with 5%.

Not surprisingly, the migration from watching on the signup platform to the television does not happen immediately. The company revealed data showing how viewing migrates toward the TV over a 6-month period. For example, after one month about 50% of viewing hours are through a TV screen, 30% is on a PC, 13% on a smartphone, and 7% on a tablet.

As the largest direct-to-consumer video service in the world, Netflix can teach us a lot about how video consumption habits are changing.

Recently released data show we are watching for longer and including International content in our video diets.

We are also watching mostly on TV and from one other personal device.

[1] In Western Europe the number of people per household is less, in Asia and Africa it is more.