Netflix has struggled to get the business model right in Indian. However, according to new data from Penthera, its download technology is more than up to the challenges of India’s mobile network.

Netflix adapts to the Indian market

Netflix has struggled to reach audiences in India. As recently as the middle of last year, the company had less than 2 million subscribers in a country with a population of 1.3 billion. What’s more, it is far behind market leader Hotstar, which likely has 20-times more paying customers.

Aside from price, Netflix had another problem in India. The service is optimized for connected TVs, but few homes have one. Instead, close to 400 million Indians have a smartphone with most using it to watch video. Netflix has now fixed this problem by introducing a cut-price smartphone-only plan.

Now Netflix India is cheaper and targeted to the correct connected screen, it seems poised for significant growth. According to new data from Penthera, one marquee feature should set it apart from the competition.

In the new free report India Mobile Streaming Behavior Survey, Penthera talked with 300 adults aged between 18 and 50 across India.[1] It is fair to say the group is enthusiastic mobile viewers. 70% of the survey group streamed video daily, and 93% streamed at least monthly. Nearly three-quarters said they streamed video when on a trip, and 2-in-5 said they streamed while commuting or when “out-and-about.”

Downloading is a very popular feature of the video streaming services used by the survey group. 4-in-5 said they download videos at least weekly, and 2-in-5 download daily. Flexibility is the primary reason people download, with two-thirds saying it allows them to watch when and where they want. Avoiding network problems like buffering was a concern of 2-in-5 survey respondents. Other significant reasons cited included avoiding mobile data usage and not worrying about if they are on a Wi-Fi network.

The mobile network often not up to the streaming task

Mobile streaming performance is a challenge in many countries, including the U.S. India is no exception. Slow video startup times and rebuffering topped the list of frustrations with the mobile streaming experience.

Buffering, which is public enemy number one for streamers, was reported as being very common. Three-quarters of respondents said they experienced buffering events more the 25% of the time they streamed video. 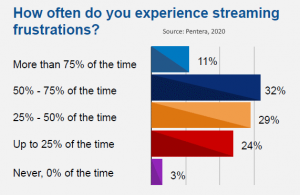 Slow startup times also plague video streamers. Half reported having to wait an average of five seconds or more for their video to start. Conversely, only 1-in-10 said they had to wait three seconds or less.

According to the new free report TV in Your Pocket from nScreenMedia and VideoNuze, no company is better prepared to deal with the vagaries of Indian mobile network connectivity problems than Netflix. Its download support is the most feature-rich of the 80 services tested for the report. Moreover, Indian users will appreciate features like automated download of the next episode and autodeletion of watched episodes.

The Indian market is dominated by mobile video streaming.

The mobile network is fraught with problems such as slow video starts and buffering.

Netflix’s market-leading download facility defeats the mobile network problems and will set it apart from competitors.

[1] This is a small sample for a survey and readers should use it for guidance only.