One of the television industry’s greatest fears is that ad revenue is at risk as viewers migrate more of their viewing to ad-free services like Netflix. The truth is that Netflix has already taken between $3 and $6 billion worth of TV ad time off the table.

John Martin, CEO of Turner Networks, is a worried man. He is working hard to make the ad-supported television experience more competitive with ad-free SVOD by making the ads more relevant to viewers. However, at CES 2018 he expressed his fear that the TV industry just wasn’t moving fast enough:

“My fear, and what makes me wake up with the sweats, is like when the industry finally figures out how to get full addressability, everybody’s going to be watching video on Hulu and Netflix.”

He has every right to be concerned. According to calculations by nScreenMedia, Netflix has already had a substantial impact on the television advertising market in the U.S.

As of Q3 2017, there are 56.4 million Netflix streaming subscribers in the U.S. The company reported at the beginning of 2017 that it was delivering 125 million hours of video a day to its approximately 100 million members. That works out to an hour and quarter per day per subscriber. Before Netflix existed, much of this time would have been spent with ad-supported television viewing. So, how many ad views is the industry missing out on due to Netflix viewing?

Some television channels air more ads per hour than others. For example, Fox devotes nearly 17 minutes per hour to ads, while CW airs around 11 minutes of ads. The average television channel airs around 14 minutes of advertising per hour. Assuming 30-second ads, the average U.S. Netflix subscriber misses out on seeing 35 ads per day, and all of Netflix’ U.S. subscribers miss nearly 2 billion ad views per day.

The value of ads lost to Netflix viewing 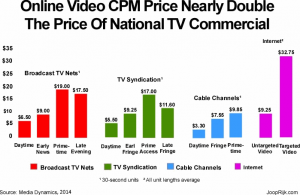 How much are all of those missed ad views worth to the television industry? In 2014, typical costs for a thousand ad views (CPM) in primetime on broadcast television was $19 and on cable was just under $10. Non-primetime rates on broadcast TV were between $6.50 and $9, and on cable TV between $3.30 and $7.55. Since then, Media Dynamics says ad CPMs in the upfronts have increased in cost nearly 30%.

For this analysis, we will assume a conservative average primetime CPM of $18 for primetime and a non-primetime value of $5.

Netflix says that most of its viewing is through connected televisions. Conviva data suggests that around 45% of premium video starts on a connected TV are between 8 and 11 PM, and 55% during the rest of the day.

In a year, the average Netflix US subscriber misses 5753 ads during primetime viewing, and 7032 ads during non-primetime. Using the approximate ad CPMs shown above suggests the value of these missed ad views is $139 per year per subscriber or $7.6 billion for all subscribers.

However, this analysis assumes Netflix viewing replaces only ad-supported television viewing. It doesn’t consider ad-skipping through DVRs, though Nielsen says the average U.S. adult only spends about 10% of TV viewing time on DVRs. It also doesn’t consider the use of premium video networks like HBO and Showtime. These factors could lower the calculated value of lost ads by 15% to 20%.

So, perhaps a better estimate of the value of missed ad viewing due to Netflix is $6 billion.

Another way of calculating the missed TV ad revenue is to use a figure the television industry has placed on ad-free viewing. CBS All Access and Hulu allow customers to pay $4 a month and see no ads in on-demand viewing.[1]

Using $4 a month as the value of ad-free viewing suggests the value of the ads missed by Netflix subscribers is about $3 billion.

The value of television advertising in the U.S. in 2017 was $72 billion, according to eMarketer. That means Netflix viewing has removed between 4% and 8%.

The television industry is concerned consumers will migrate much of their viewing to ad-free SVOD.

The truth is they already have.

Netflix viewing is responsible for between $3 and $6 billion worth of lost TV advertising revenue annually.