According to Digitalsmiths, Netflix is spending 20 times more per subscriber than pay TV operators on recommendations. Is it any wonder that, as TV viewing withers, SVOD services bloom?

Despite the inroads SVOD services have made into the homes and hearts of Americans, the majority of their viewing time remains with television. In 2015, the average viewer spent over 4 and a half hours watching traditional television (live plus DVR viewing), and one a quarter hours watching online video. That said, the trajectory of the two services are very different. Traditional TV viewing decline nearly 7% in 2015, and was down 2.4% in 2014. Online video consumption increased 21% last year, and 26% the year before that.

This cannot simply be attributed to the move away from linear viewing. Through their pay TV subscriptions, consumers have access to a lot more content than is available through Netflix, and much of it can be watched on-demand. Over half of American homes now have a DVR, and virtually all pay TV homes have access to large libraries of VOD content. Not only does a pay TV subscription deliver access to much of the same content as is available in SVOD services, it also has more recent content not available to SVOD customers.

Yet viewers continue to spend more and more time with SVOD services like Netflix. They are also more satisfied with SVOD than pay TV. Cowen and Co. research shows that Netflix has a customer satisfaction rating of 4.1 (out of 5), while cable/satellite providers averaged 3.2.

In Digitalsmiths latest white paper The War Between OTT and Pay-TV, the company says much of the difference can be attributed to the fact that it is much easier to find something good to watch on SVOD than pay TV. To bolster its claim, Digitalsmiths compared the amount of money Netflix spends per subscriber to provide appropriate movie and show recommendations versus what the typical pay TV spends. The differences are startling. 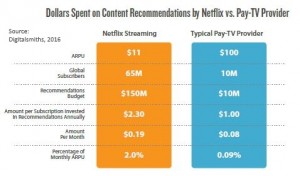 The average pay TV operator spends just 8 cents per month per subscriber to provide show recommendations. Netflix spends 18 cents. However, compared to the revenue received from each subscriber the difference is even more shocking. Netflix spends 2% of monthly ARPU (average revenue per unit/subscriber) on recommendations, while the average pay TV provider spends more than 20 times less, or just 0.09%.

Chief Products Office for Netflix Neil Hunt says his research suggests that when a user enters the Netflix app the company has between 30 and 90 seconds to capture the interest of the users. He calls this “the moment of truth.” He recognizes that retribution for failing to deliver on the moment of truth is swift. With so many other things to do and watch online, a user simply moves to another app. This helps to explain the company’s substantial investment in recommendations.

In the past, Pay TV operators were not subject to the moment of truth as there simply weren’t any alternatives. Today couldn’t be more different. With more than half of their customers also using SVOD services, television alternatives are a few seconds away. There is also competition for eyeballs from tablets, and mobile phones. If operators are to slow the losses in viewing times they will need to help their customers get to the good stuff faster. And that means investing more in recommendations.

Traditional television suppliers have witnessed the biggest drop in viewing times ever over the last 2 years.

At the same time, usage of SVOD services has exploded, despite the fact that much of the content is available with a pay TV subscription. .

With much larger investment in recommendations, it is simply easier to find something to watch with SVOD.

TV voice search failing to connect viewers to their content