At Mobile World Congress last week, Netflix announced it would launch functionality to deliver information about a show someone is watching to a second screen in their possession. Many thought that the failure of the Beamly last year signaled the end of the second screen TV sync approach, so is Netflix wasting its time?

Business Insider says the bonus information Netflix is providing will be available to anyone that uses their phone to send a show or movie they want to watch to the TV. Typically this done by “casting” the video from the phone to a Roku or Apple TV, or using a Chromecast (which is exclusively controlled by a smartphone or tablet) with a native app designed for the device. Once the video is playing on the TV, the phone will display program information, including cast member data and show trivia.

The boil has come off of the creation and distribution of second screen content in the last year. The trend was confirmed when second screen pioneer Beamly (originally called Zeebox) turned its back on second screen synced content and focused on the opportunities to engage with viewers before and after a show. This allowed the company to deliver highly targeted marketing messages and led to Beamly later being purchased by Coty, the beauty products company. 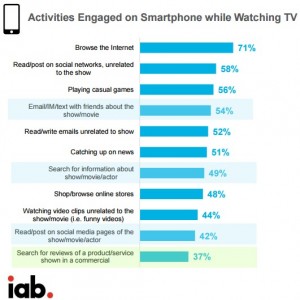 The failure of Beamly doesn’t condemn the whole second screen approach. It simply illustrates that there is not enough differentiated functionality in standalone second screen TV apps to justify a consumer downloading and using them. Combining the functionality with the Netflix mobile app gets over this problem, and guarantees a user will download it.

Netflix is also being smart in limiting the functionality to customers using their phone to cast a video to a TV. These customers are, by definition, using a second screen while watching TV, and are certain to use that phone while the show is on. The iab says that half the time smartphone owners use their device while watching TV they are looking for information about the show and the actors in it. With this functionality as part of the Netflix app, they instantly have the information they seek!

For those customers using the mobile app to cast video to the TV, Netflix is helping to improve the overall service experience. It allows the company to claim that watching shows on Netflix is better than on other services. It should also help keep people watching longer, see more value in the service, and keep paying the monthly subscription.

Standalone apps providing second screen synced experiences do not provide enough value to get consumers to download and use them.

Combining the functionality with mainstream apps like Netflix gets over this problem.

Targeting people that use a smartphone to control playback on a television is a smart move, as it guarantees that they will see the functionality.