2020 shaping up to be a rough year for Netflix

Many popular licensed titles are leaving Netflix over the next year or so. The company says it is ready, after spending billions on original content. But has it done enough to stop the 25% of vulnerable subscribers from leaving?

Chances are something you love is leaving Netflix in the next year or so. Content providers, once happy to license content to the streaming giant, are now clawing back their best shows back to use in their services. Moreover, the most prominent titles leaving will hurt the most.

Friends will leave Netflix in 2020. WarnerMedia is taking back all 236 episodes of the show and putting them in its HBO Max service, slated to launch later this year.

Netflix’ 2016 deal with Disney expires this year. Between now and 2021, titles like Mary Poppins Returns, Ralph Breaks the Internet, and The Incredibles 2 will leave, along with Star Wars and Marvel titles.

Company executive claim to have been preparing for the day when content providers take back their shows for their services. So, is it ready?

Netflix has been diverting an increasing amount of its massive content spending toward the creation of original content. Of the rumored $13 billion the company spent on content last year, 85% went toward original content creation. As of mid-2018, the company had 245 original shows available with 257 upcoming, giving it more than triple the originals of closest SVOD rival Amazon.

It has also been able to create certified franchised hits like Orange is the New Black and House of Cards. Season three of Stranger Things has just been released on the service and is drawing the attention of many subscribers. According to the company, in the first four days of its release, 40.7 million member accounts have watched at least part of the third season.

Netflix has done an incredible job growing the number of subscribers since streaming launched in 2007. It has grown subscribers every year since then and still manages to turn in creditable growth in mature markets like the U.S. Last quarter, the company added 1.74 million paid customers in the U.S. to reach over 60 million. 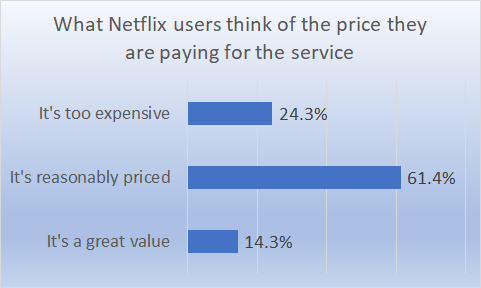 However, losing so many great shows and movies to new streaming services like Disney+ and HBO Max is bound to have an impact. For example, a new survey of 1,004 Netflix users by KilltheCableBill shows that a quarter think the service is too expensive. This price sensitive group could be particularly vulnerable to the loss of so much great content, especially if they’re looking to save money so they can afford one of the new services.

When Netflix reports Q2 results next week, likely none of the content pressures building will have any impact. The company is forecasting that it will add 5 million new paid streamers to reach 154 million paid customers worldwide. However, Q2 2020 could be a completely different picture as the content losses begin to exact a toll and competition ratchets up from Disney, WarnerMedia, and NBCU.

Company executives say they are ready, after investing $11 billion in original content in 2018 alone.