Netflix Japan launch will be tough, long haul to success

The Netflix Japan launch will be the only one in the third quarter, and it looks to be a tough one. With many SVOD services in market and more launching in advance of Netflix arrival, it could be the company’s longest haul to meaningful revenue yet.

In the second quarter earnings call last week Reed Hastings, Netflix CEO, commented that “Japan will be one of our slowest markets.” That could be an understatement. There are at least 10 major TV networks that have launched SVOD platforms; including NHK On Demand, FujiTV On Demand and TBS On Demand. Another, a joint venture of 29 content owners called Bonobo, will launch this fall. There are almost as many non-TV channel sites; such as Hulu, GyaO, and U-NEXT. Taken together, these sites have already acquired 7M subscribers. 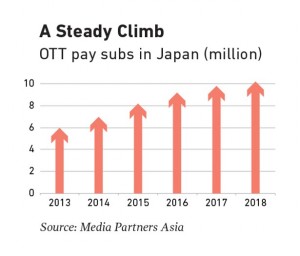 According to Media Partners Asia Japanese SVOD will continue to grow strongly, finishing 2018 with around 10M subscribers. This will likely push SVOD revenue to well over the $1B mark in that timeframe.

The market is about to become more complicated, with the emergence of free-ad-supported television services. Japan’s five Tokyo-based ad-supported TV networks announced that they would launch a new service, TVer, in October to stream their new shows. Each network will provide ten shows weekly to the free site. The service will be operated by Present Cast, a joint venture between the networks and TV ad agencies formed in 2006.

This should provide a shot in the arm to online video advertising, which is practically non-existent in the market today. In 2014, the advertising supported video on-demand (AVOD) market amounted to just 25.2B yen, or $200M. It is forecast to grow to 64B yen in 2017, but this will be a tiny fraction of the traditional TV ad market. Terrestrial TV ad spending was 1.1T yen ($8.8B) in 2014.

One of the traditional ways Netflix has employed to help penetrate markets quickly is to partner with device manufacturers. According to Mr. Hastings the company has already made a good start in that department. He stated that Sony, Panasonic and Toshiba are all integrating the Netflix client into their smart televisions. They are even going further by including a red Netflix button on the remote control, even though the service has not launched in the country yet. However, keeping in mind that televisions have an 8 year replacement cycle, it could take a while for a large number of Japanese to get a Netflix enabled TV in their home.

It is possible that mobile is much more important in Japan than other markets. There are now more wireless broadband subscriptions than inhabitants, and smartphone penetration was already 55% in March 2014. Partnering with handset manufacturers might be an even better strategy than smart TV manufacturers.

Looking at all this data, Mr. Hastings is right to sound a cautious note about the Japanese market. It looks like it could take a very long time to build to a meaningful market and revenue shares.

The only international launch Netflix has planned for Q3 2015 is Japan, and it is shaping up to be a tough one.

Though fixed and mobile broadband penetration is good, the Japanese appear to be reluctant to pay for video services.

There are already many SVOD competitors active in the market, with more competition arriving from new free-ad-supported TV services.

Japan will be a very challenging market for Netflix and could take several years to build to meaningful revenue.