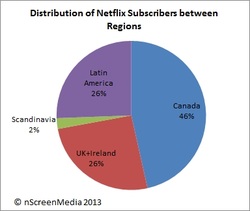 In Q4, International members of Netflix grew an impressive 40% to over 6M. Netflix didn’t release regional numbers for Q4 but did release some data for Q3. Based on this data we estimate that Canada is the largest region for Netflix with 46% of subscribers. Latin America and the UK+Ireland both have around 26% each of the rest of the subscribers. It is still very early days for Scandinavia, which we estimate has approximately 100 thousand subscribers.
Why International Expansion
Netflix recognizes that growth will be slower in the US than it has been in the past. They are looking to International markets for more aggressive growth. Growth is very important to the company. Since the content licenses they have secured are not based on the number of subs the incremental costs incurred for signing up a new subscriber are extraordinarily low. In other words, new subscribers do not increase content costs, the major debt category for the company. Content license obligations now total over $4B.
International Strategy
The company’s expansion in to new markets is characterized by the following strategic approaches:

Competition
In the UK Netflix has been very successful so far. The company said it cleared the million subscriber mark within 7 months of launch and likely have 1.5-1.8M today. Lovefilm has 2M total subs across 5 countries. So, it’s very likely Netflix has more subs than LoveFilm in the UK today. This is a very competitive market. Sky launched NowTV, an OTT movie service, last year and Tesco, the giant British retailer, has Blinkbox which it is pushing through its stores. Growth is very strong for streaming services. Blinkbox said it had 220% growth in 2012. Despite all the competition, Netflix continues to do well.

At the moment, Netflix’ pricing and launch strategy seems to paying off. Despite very strong competition in every region the company operates in, we expect strong growth in the International business throughout 2013.

Client Strategy
Client strategy is the same in all regions. Netflix works with key CE makers to get the client on the most popular devices. For example, in Scandinavia, they worked with Samsung to make sure their client was available in each of the 4 native languages on launch day. With the rest, they expect the CE maker to create the client themselves (Netflix must certify it before shipment.) The company remains a close partner with Roku in countries where the Internet STB is available (UK and Ireland.)

Further Expansion
The company claim to have no plans to expand further in the first half to 2013 although they are evaluating some new markets for the second half of ’13 and first half of ’14. Expect to see the company push further into Europe, particularly in Germany and France.

91)Data throughout this paper is drawn from Netflix financial statements and filings which can be found at
http://ir.netflix.com/results.cfm