What if none of the 80+ movies Netflix makes this year are monster hits? It may not matter at all. Unlike Hollywood, Netflix is delivering movies where consumers want to watch them: at home. In that environment, name-brand stars could have more value than the latest hit.

Most don’t go, don’t want to go to the movies

So, let’s review. Three-quarters of US adults are as happy or happier to watch a movie at home as in the theatre. About that many again say they go to the movies a few times a year or less. Those over-45 are more keen on staying home.  Those under-45 are slightly less keen on staying home, but the majority still prefer in-home viewing. 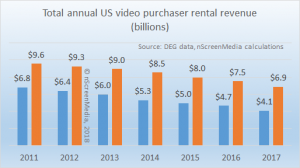 Though people don’t go to the movie theater, they do still want to watch movies. According to Netflix, the average subscriber watched 60 movies on the service in 2017. Though video rental revenue has fallen 40% since 2011, US adults still spent over $4 billion renting videos in 2017. Similarly, video purchase revenue has fallen 28% since 2011. However, US consumers spent nearly $7 billion on videos in 2017

Netflix says it will spend around $8 billion on content in 2018. The data discussed so far explains why so much of the content investment will go to making the 80+ movies promised this year. It also helps explain why Netflix strategy with movies is very different from the traditional Hollywood approach.

Hollywood is obsessed with the blockbuster movie. The industry spends a $100 million or more on top episodes from franchises such as The Avengers and The Justice League. It spends tens of millions more on the promotion of the movies. Given the reluctance of most people to come to the theater, it’s easy to see why Hollywood needs big movies and promotion budgets to get the reluctant masses into the theater.

Netflix doesn’t need to do that. Its audience is already in its preferred location. All Netflix needs to do is make sure the audience finds a movie interesting enough to watch. The strategy for doing that does not require a blockbuster hit, but it does require star power.

Netflix is focusing its movie budget on name-brand stars. A movie like Our Souls Tonight with Robert Redford and Jane Fonda is very likely to catch the eye of older audiences. Like Father, a movie starring Kelsey Grammer is also likely to catch the attention of older audiences. However, it has crossover appeal to millennials because of co-star Kristen Bell and a character role for Seth Rogen.

Of course, a monster hit does have value for Netflix. It helps in attracting new subscribers. However, smaller movies crafted around favorite stars will help feed the weekly movie habit of many customers. Moreover, it will keep them paying their monthly subscription fee.

Most US adults would rather watch movies in their home.

Netflix knows this and is producing 80+ movies this year to feed the movie habit of its subscribers.

The company does not need the movies it makes to be big hits since it doesn’t need to persuade viewers to leave home to watch.

Instead, the company is focusing on reliable, name-brand stars to keep their customers watching.