A new report shows just how much premium sports have increased in price over the last decade. As the negative dynamics in the TV market continue to play out, the market for sports rights could shift dramatically in the next few years.

The escalating cost of sports channels

The high costs of live premium sports are highlighted in the recently released The 2019 Sports Report from Kagan and S&P Global Market Intelligence. According to the report, Sports have become a much larger proportion of channels in the pay TV over 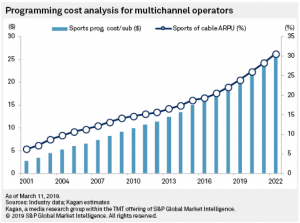 The report makes clear that sports are a big driver of the increase in license revenue an operator must pay for content.  The average sports programming cost on a per user basis has risen from $9.09 per month in 2009 to $18.55 in 2018. Sports channel license fees now consume 22% of the average cable bill and are forecast to reach 30% by 2022.

With the increase in cord-cutting, sports may not provide the same stickiness for pay TV operators as they have in the past. DirecTV lost 600,000 subscribers in Q1 2019, a big increase in defections from the same quarter in 2018. DirecTV has invested heavily in premium sports over the last several years. The satellite operator sells NFL Sunday Ticket, MLB Extra Innings, NHL Center Ice, NBA League Pass, and ESPN Full Court as add-ons to its subscribers. These packages and the other sports channels it provides are not doing a good job at retaining customers.

At the same time, the number of premium sports viewers are falling. The Super Bowl audience has fallen consistently for the last four years. 2019’s game, which was carried by CBS, drew an audience 14% smaller than the biggest game in 2014. NFL average TV audience sizes are also declining. In the 2016-17 season, they fell 8% and were down a further 10% in the following season. ESPN reached a peak of 100 million households in 2011. In 2018, the number of homes the channel reaches fell to 85.9 million.

The equation driving the value of sports is changing

In 2021, the NFL’s agreements with CBS, NBC, and Fox expire, and the ESPN deal for Monday Night football ends in 2021. As well, exclusive agreement for Sunday Ticket ends in 2022. The world could be a very different place in two to three years for sports licensing.

The pace of subscriber losses could quicken between now and 2022 making pay TV operators less able to pay high prices for exclusive sports packages. Similarly, if audiences for football and other sports continue to decline the games become less valuable to broadcasters.

However, their maybe others willing to continue to pay the high price for sports. For example, Disney has made it clear it wants viewers to see ESPN+, its online subscription portal, as their home for sports. The service is already selling PPV matches with WWE and season access to MLB out-of-market games. It could be an excellent home for NFL Sunday ticket.

Amazon is flexing its muscles in the sports arena. It has purchased EPL and tennis rights in the UK and NFL rights in the US. It could also step up and bid on more premium sports. Google is making a major effort with YouTube TV and YouTube to attract television advertising revenue. Premium sports would be very helpful in accomplishing that goal.

Who knows what other company could join the bidding for premium sports three years for now?

This dynamic could open the door for greater availability online for premium sports.