Netflix continues to preoccupy pay TV executives around the world. Meanwhile, as the threat from vMVPDs and Amazon has faded over the last year, another company has risen to replace them: Disney!

Netflix still wields the most influence. Disney is catching up.

Whatever your thoughts about Netflix’ prospects, for the last three years, it is the company that pay TV executives overwhelming vote atop the list of most influential video services. It isn’t even close, with around 60% picking the company in 2018, 2019, and 2020.

Second place, on the other hand, reflects a growing awareness and perhaps wariness over the influence of Disney. Since 2018, the company has made several acquisitions (including Fox and BAMTech) that have moved it from a traditional media distribution stalwart to a vertically integrated Internet distribution powerhouse. The successful launch of Disney+ clearly resonated with the several hundred industry executives across 67 countries that participated in the Digital TV Europe (DTVE) survey. 24% said they thought Disney wielded the most influence in the new poll, versus 1% last year.

In the previous survey, the second-place spot in the influence stakes was occupied by Amazon, with 22%. This year, the retail giant plummeted to 12% to third place. In years past, Amazon’s moves to secure live sports rights and displace the need for pay TV with its Channels aggregation strategy seemed potentially very disruptive to traditional TV distributors.

However, over the last year, Amazon has opted to partner with operators like Comcast and Virgin Media to put Prime Video on operator set-top boxes. As well, its pursuit of live sports rights has proven to be in support of its retail business rather than a bid to become a significant force in live sports delivery.

The perceived threat from vMVPDs fades 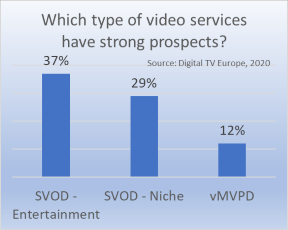 It is perhaps not surprising that the perceived prospects for the vMVPD business model have fallen so far so fast. PS Vue, one of the first services to launch, closed. The number of subscribers to AT&T TV Now quickly faded once introductory offers were withdrawn, and prices raised. At its peak, the service had 1.9 million subscribers, but today it has under half that number. That said, though the aggressive growth of the early years is over, the business is still showing signs of life. YouTube TV and Hulu Live continue to grow strongly.

SVOD has been the model with the strongest growth prospects for several years in the DTVE survey. 2020 is no exception, with 37% saying they see very good prospects for general entertainment SVOD services. However, in the most recent study, DTVE also asked survey participants about the prospects for niche interest SVOD. 29% thought growth prospects for the service category were excellent, the second-highest score in the survey.

There is plenty of evidence consumers are starting to broaden their engagement with SVOD beyond the top four services. Nielsen says that 93% of people who use a streaming service said they would keep or increase the number of platforms to which they subscribe. Moreover, niche services like BritBox continue steady, strong subscriber growth. The U.S. joint venture between the BBC and ITV recently announced it had crossed the one million subscriber level, nearly doubling in size in one year.

However, Disney has lept to the fore in the last year as its strategic shift to focus on direct-to-consumer services became clear.

SVOD services, including niche services, continue to impress executives with their market opportunity.