Four reasons mobile video delivery is too important to ignore

Mobile video delivery is commanding increasing attention from content providers and advertisers, with good reason. Here are four facts about mobile viewing that illustrate why the platform is too important to ignore.

Traditional TV still has the best reach, at least in the US. According to Nielsen, 86% of the population watches live or time-shifted television once a week or more. However, mobile is not far behind. 80% of the people use a smartphone for app and web each week. Of those, more than three-quarters spend two hours or more per week with video-focused mobile applications.

Mobile is a premium video platform

The prevailing view is that mobile is predominantly a video snacking platform. It turns out smartphones and tablets are an essential platform for television consumption. In a first-quarter 2019 survey in the UK, Germany, and Sweden, nScreenMedia asked what percentage of survey participants total TV viewing time was on mobile. Of course, the TV was the most used screen. However, mobile commanded as much as 17% of total TV viewing time in Sweden. Germans spent 15% of their time watching on mobile, and the British watched on mobile 14% of the time.

In all three countries, the smartphone was the preferred mobile platform, commanding at least 60% of mobile viewing time. 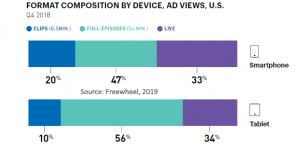 In the US, mobile is just as crucial for video consumption. Freewheel reports that, in 2018, 28% of video ad views were on mobile devices. Half of the ad views occurred during full TV episode viewing, and a third came from live event streaming. Once again, the smartphone is preferred, delivering 70% of mobile video ad views.

The explosive growth in mobile video ads led to a slight decline in revenue share for search and banner ads, to 43% and 37% respectively. On the other hand, mobile share of video ads increased from 12% in 2017 to 15% in 2018.

Mobile’s strong performance should come as no surprise. YouTube and Facebook both report their number one platform is mobile.

I’ll be discussing mobile video at the VideoNuze Video Ad Summit Tuesday, May 8th in The Westin Time Square New York. Why don’t you join me there?

Smartphones almost equal the reach of traditional television in the US.