When it launches, Quibi will be a smartphone exclusive. Much of the young target audience for the service certainly prefer viewing on the smartphone. However, they love the connected TV too. They will not take kindly to being prevented from using it.

Jeffery Katzenberg, the founder of Quibi, is banking on there being a large smartphone audience for the service when it launches on April 6th, 2020. It will deliver a mix of premium scripted and unscripted shows exclusively to mobile devices for $5 a month with ads, and $8 without them. Mr. Katzenberg believes the core audience for the service is young people between 25 and 35-years old, with good appeal in the broader 18 to 44 age range.

Meg Whitman, who is working with Mr. Katzenberg on Quibi, likens it to HBO:

“What we say internally is we’d like to be the quality of HBO and offer customers the convenience of Spotify. We’re not Facebook Watch. We’re not Snapchat. We’re not Instagram TV. We’re not YouTube. We’re Quibi, and it’s not denigrating those platforms at all … but we’re staking out a premium position relative to those.”

So, exactly how big is the potential audience for Quibi, and is its total focus on mobile viewing a wise move? 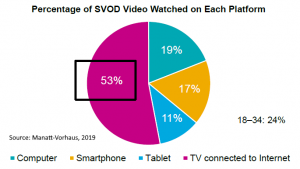 According to a recent Manatt-Vorhaus study, the average online user watches about 23% of their total video consumption on a smartphone. More viewing takes place on the connected TV (36%) and the PC (28%.) However, certain groups have a much stronger affinity for mobile viewing. For example, when it comes to SVOD viewing, the average online user devotes 17% of their video viewing time on a smartphone, while 18-34-year-old males watch 24%.

Mobile-only is a mistake

The data shows that there is a large audience, particularly among young people, that are comfortable watching video on their mobile phones. However, restricting them to only watching on their phones could be a huge mistake.

Bjarne Anders Mykleburst, Head of Distribution for Norway’s NRK, told nScreenMedia about a show the broadcaster created targeting young people on their smartphones. As in the U.S., young Norwegians spend most of their media time on their mobiles. NRK went after them with a made-for-web drama series focused on the trials and tribulations of growing up in Norway. Each episode lasted 5 to 7 minutes and had a daily reach of 700-800,000 unique viewers (Norway’s population is 5 million.) However, Mr. Mykleburst said the biggest audience for the show occurred on the television, where an omnibus version of the week’s webisodes was shown on Fridays.

The NRK experience illustrates that while the smartphone is essential for the young the connected TV is critical too. The Manatt-Vorhaus data shows that the connected TV is the primary viewing medium for 19% of 18-34s. In other words, 1-in-5 of young people want to watch on the connected TV and won’t be able to with Quibi.  Nielsen’s data further shows the importance of the connected TV. The company says that in Q1 2019, 78% of 18 to 34-year-olds used video-focused apps on their smartphone and 62% used a TV-connected device.

Quibi producers plan to take advantage of the smartphone viewing environment, and this could mean the content will not look optimal on a TV screen. However, there are plenty of reasons subscribers will still want to watch on a TV screen. There is no getting around it. Few people restrict their viewing to one screen, and stopping them using the one they prefer will win Quibi no friends.

Quibi is focused on delivering premium content to smartphone viewers in 5 to 10-minute episodes.

There is a large audience that will be comfortable viewing premium video on the smartphone.

However, the audience also loves the connected TV and will not be happy that they can’t use it.