Magid data on sports viewer attitudes show, unsurprisingly, they miss live sports. The company concludes that all the gains made by SVOD services among sports viewers will evaporate once live sports returns. That is not likely. Instead, sports fans are likely to replace more non-sports viewing with SVOD and turn to cheaper vMVPDs for their sports needs. 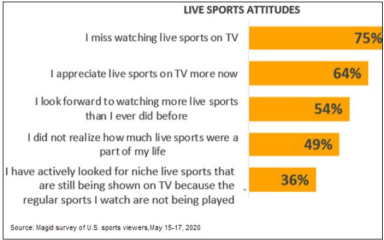 Magid says that in mid-May, 75% of U.S. sports viewers said they missed watching live sports on TV. The survey group was clearly mourning the absence of one of their favorite pastimes. Over a half said they would watch even more sports when games resume. 36% even resorted to hunting for live niche sports that might have escaped COVID-19 induced shutdowns.

Frankly, it is hard to imagine sports-deprived fans would respond any other way to this survey question. Far from being a revelation, the data merely confirms sports fans miss, well sports! Magid goes on to say that the data suggests a sense of urgency among sports viewers. To prove the point, the company points to other survey data showing 89% of sports viewers say they will watch live sports on TV even if there are no fans in the stadiums.

Again, we do not need a survey to tell us this. The German Bundesliga resumed play on May 17th. The game between Dortmund and Schalke on the first weekend attracted a U.S. audience of 450,000 on Fox, 725% larger than the last Bundesliga live game broadcast on the channel.

Magid goes on to conclude that:

“The increase in SVOD viewing, as well as gaming and social media usage among sports viewers, can be attributed to the lack of live sports, not COVID-19.“

As further evidence for the forecast reversal of the SVOD usage spike, Magid points out that SVOD services are “running out” of content. There is already evidence that some services are struggling due to the production freeze. For example, new 7Park data shows that the spikes in usage experienced by Hulu, Apple TV+, and Disney+ have mostly reversed. However, Netflix and Amazon Prime Video usage remain significantly higher. Netflix says its flow of new content should not be interrupted until next year. Moreover, since production is slowly restarting, it may never experience an interruption, and others may recover quickly.

Is sports still an anchor for pay TV?

One of the key conclusions reached by the Magid team is that:

“Distributors will need to prioritize live sports to sustain their businesses in the face of cord-cutting and switching. Networks that focus on programming like reality, home, travel, and kids could be sacrificed long before those that focus on sports.”

The problem with this statement is that cord-cutting was accelerating last year before the sports shutdown. To be sure, it got much worse in the first quarter, and some of that could be due to the lack of live sports. However, there is no reason to believe the resumption of live sports will have any long-lasting effects on the fortunes of traditional pay TV. Simply put, it is an industry in decline.

However, there is reason to believe that the lockdown will accelerate the move toward online viewing. While sports viewers were discovering new SVOD services, they may also have tried out vMVPD services like Sling TV that were available free during the lockdown. When sports do restart, many may decide to drop cable TV and use cheaper vMVPDs for their live sports and SVOD for their entertainment. There is even evidence in the Magid data this is already happening. The company reports that 40% of vMVPD users say they will watch more sports when live events resume versus 37% for MVPDs.