Broadcasters should be working with not suing Locast

The Locast broadcaster fight has some of the elements of the TV programmer’s previous battle with Aereo. However, there are substantial differences, and Locast can help them win back an audience they are losing fast.

Locast is a non-profit organization started in 2018 to bring local TV stations to viewers over the Internet. The service is available in 13 metropolitan areas including Chicago, Los Angeles, New York, and San Francisco and has 200,000 users.

In July, the four major broadcasters – CBS, NBC, ABC, and Fox – joined forces to sue Locast in Federal Court. At stake is the estimated $10 billion in license fees the broadcasters currently receive from pay-TV providers.

If this story sounds familiar, it should. Aereo launched a similar service in 2013. It too was sued by the broadcasters. The case was eventually settled by the Supreme Court in favor of the broadcasters in June 2014, resulting in the eventual closure of Aero.

Is Locast just Aereo 2.0? No. The crucial difference is that Locast does not charge for service. The law allows non-profits to provide “translator” services that aid consumers in receiving the broadcast services in their area. Locast argues it is using the internet as the translator services.

Not surprisingly, broadcasters don’t see it that way. They say Locast is a non-profit in name only. AT&T is a significant contributor to the organization, and its founder David Goodfriend is a paid lobbyist for Dish Network. Both AT&T and Dish are embroiled in license fee disputes with the broadcasters.

Whatever the merits of the case are on either side, the broadcasters might be better off, in the long run, working with Locast, not fighting.

It is no secret that broadcasters have struggled to maintain their audience over the last several years. For example, in the fourth quarter of 2018, Nielsen says that broadcast C3 ratings fell 11% over the same quarter in 2017. CBS, ABC, NBC, and Fox combined for an average audience of 7.02 million in the 18-49 age group, down 840,000.

It is with the young viewers that the broadcasters are in the most trouble. 9 out of 10 of the biggest TV shows in 2018 had an audience with a median age over 50. The list includes shows like Big Bang Theory (median age 56) and The Voice (median age 57.3.) According to Nielsen, 18-34-year-olds watched 17% less traditional TV in Q1 2019 than one year earlier.

Where are the young viewers going? To be sure, many are spending time on Netflix. However, it is free services that are benefiting the most from the young’s diminishing interest in broadcast TV. For example, on mobile devices alone, YouTube has better reach among young people than any TV network. 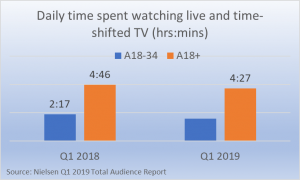 However, young people are not only consuming video on demand. They still enjoy linear television experiences. Pluto TV, which provides hundreds of channels of free ad-supported linear TV, has 18 million monthly active users, half of which are in the 18-34-year-old age group. The youngness of the audience is a big reason why Viacom bought it. The cable channel provider needed a way to reconnect with young audiences that were fleeing its broadcast TV channels.

The simple truth is that Locast can help broadcasters reconnect with younger viewers. Far from suing the service, they could be better off in the long run working with it. Moreover, that is perhaps where they may well end up if they lose their case.

Broadcasters are trying to get non-profit Locast shut down to prevent it retransmitting their channels without a license.

No matter what the merits of the case, Locast can help broadcasters reconnect with younger audiences which are leaving in droves for online services.