Ad-targeting in live and linear streams is essential to reducing ad loads while realizing the full value of the content. However, scaling to millions of users is a major challenge. Yospace says that pre-fetch technology helps us get the needed scale.

Reducing the ad-loads in live and linear video streams is becoming a major industry initiative. As Randy Freer, CEO of Hulu, recently put it:

“We overloaded the formats; we overloaded the commercial messages going to consumers. So, they started to say, ‘this is too much…my time is more valuable than that.’ As an industry, I don’t think we value people’s time in a way that allowed them to say ‘I get this, there’s a transaction. I’m not paying as much as I could be paying because my entertainment experience is being supported by advertising.”

However, just lowering the ad load may not increase viewership enough to compensate programmers for the lost ads. When Viacom lowered the ad load in some channels in 2017, it increased viewership, but the net result was a 2% loss in ad revenue.

Ad targeting in live and linear streams can increase ad values and, in some cases, more than compensate for lost ad pods. Unfortunately, personalizing ads to millions of streams can overload the ad server.

Why ad-servers can get overloaded in live streams

Yospace provides server-side ad insertion technology which allows live stream viewers to see individually targeted ads. Dave Springall, Founder, and CTO of Yospace says that when an ad break is reached a personalized ad is inserted into the video stream by the ad stitcher. The ad-stitcher makes a call to an ad-server provided by an 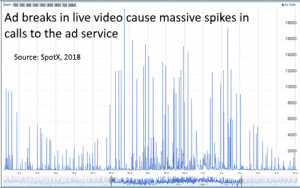 SSP[1] such as SpotX to get the targeted ad to insert. There is one request made for each viewer of the live stream. Events with many viewers can cause a big spike in ad requests to the ad-server at the beginning of each ad break. [2] All the ad requests must be serviced within a matter of seconds to ensure smooth video delivery.[3]

Careful planning by the live event provider can ensure that there is sufficient ad-server capacity to service all the expected ad requests. However, live events are unpredictable. An injury in a football game can cause an unexpected ad break, or the game may simply attract a much larger audience than expected. In either case, the ad server can be overwhelmed by ad requests and unable to service them all in the time available.

If the ad server can’t service a request in time, the stream could be delivered with no ad at all. For very popular live events many of the ads slots and even whole pods could go unfilled and result in a huge loss in ad-revenue to the programmer.

Mr. Springall says ad-server overload can be avoided by beginning to make ad requests before the next scheduled ad break. Using such a pre-fetch strategy paces the requests over a longer period. For example, the ad-stitcher can begin making requests immediately after the previous ad break. In other words, rather than having to service millions of requests in a fraction of second, the ad-server receives the requests spread out over several minutes, totally avoiding ad-server overload.

Using pre-fetch has a dramatic effect on the peak requests made to the ad server. When the ad-break occurs, most of the targeted ads are already available to the ad-stitcher for insertion into the live stream. The viewer receives a smooth, personalized ad experience, and the live event provider maximizes ad-revenue generation.

According to Mr. Springall, pre-fetch is an essential component if live streaming is to scale to television audience sizes:

“There is no question that in order to deliver quality fulfillment of monetization the ad-tech ecosystem needs more time to deal with it.”

When a live stream reaches an ad break, millions of simultaneous ad requests are made to the ad server and can overload it.

[1] The sell-side ad platform sells the targeted ad opportunity to an advertiser and returns the correct ad to insert into the stream.

[3] The length of time the ad server has to return the ad is governed by the size of the adaptive bitrate video chunks (typical 2-10 seconds.)