New data from Nielsen shows that traditional TV use continues its steady decline. It also shows that the connected television is picking up much of live TV’s losses. 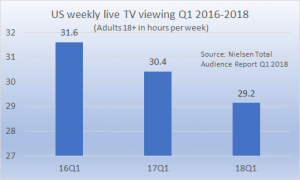 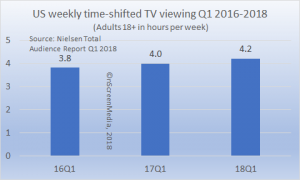 Nielsen’s data is averaged over all adults, whether they have the technology or not. The difference between live TV users and the average is not great (2%.) However, for other less adopted devices, the difference is much larger. DVR’s are in about half of U.S. homes. The average DVR user watches almost an hour per day of time-shifted TV versus 36 minutes a day for the average adult.

Over the last two years, much of the TV time lost has transferred to the streaming media player, according to Nielsen’s data. The average adult watched 3 hours per week on devices such as Roku and Apple TV in Q1 2018. Usage has increased by 96% since Q1 2016, up 1 hour and 29 minutes per week. Traditional TV lost 2 hours per week over the same period.

Nielsen does not measure video streaming to smartphones directly. It monitors time spent in apps whose primary function is video streaming. The company counts Netflix and YouTube activity in this total but not Facebook and WSJ activity. However, the data is useful in assessing how much video activity is increasing.

Nielsen says that 58% of the adult population use smartphone video apps and that the average user spends 1 hour and 56 minutes with the apps per week.

Nielsen data shows the average adult in the US is watching 8% less live TV than two years ago.

Most of the viewing losses for traditional TV transferred directly to the connected TV.

Younger people watch a third of the television as the old and three times as much on connected TVs as the old.