Streaming is a big part of the U.S. and European sports fan’s experience, allowing them to expand their viewing passion beyond traditional T.V. coverage. However, 3-in-5 said there is plenty of room to improve coverage, and they are looking for more league coverage rather than an individual team.

Sports occupy a special place in our entertainment lives. New data from Verizon Media and Sapio Research underlines its importance. The company fielded a survey to 5,000 sports fans in the U.S., UK, France, Germany, and the Netherlands. It revealed that 53% said they pay an extra fee for access to premium live sports programming through their pay T.V. or streaming service provider. 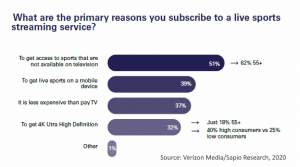 For many, streaming allows them to expand their viewing passion. Half of the respondents said they subscribe to a live sports streaming service to get access to sports that are not available on television. Not missing a game is also a big motivator as 2-in-5 said they subscribed to get mobile access.

Verizon Media’s survey data suggests the coverage of sports via streaming is far short of where most would like it to be. Survey respondents were asked to what extent their sports streaming service provided access to all teams of interest. 37% said their needs were covered to a great extent, while 47% said only to some extent. Interestingly, in the U.S., 46% felt they got good coverage of their teams. Perhaps the availability of all out-of-market games through league services like MLB.COM helps U.S. sports fans get more of what they need.

The desire for complete coverage could be an opening for sports leagues and teams. Survey participants were asked if they would consider subscribing to a premium live sports streaming service if it offered more coverage of a team or league of interest. 29% said they would definitely or probably consider doing so. Interest was much higher among the heaviest consumers. 46% of high sports consumers – watching 11 or more hours per week – expressed above-average interest. 39% of mid consumers – watching between 5 and 10 hours per week – said the same.

The interest of most live sports streamers extends far beyond an individual team. 56% of respondents said they preferred a subscription package that gave them access to all games in the sport or league of interest. Only 23% were interested primarily in accessing all the games played by a favorite team.

The ad load in traditional T.V. sports remains an annoyance for many sports fans. When asked what features are most important in the way they watch sports today, two-thirds said the DVR. Of those, more than half (39% overall) use the DVR to skip the ads.

4-in-5 survey respondents expect their live streaming service to offer a different experience than traditional T.V. For more than half, getting away from the heavy loads of conventional T.V. with fewer ad breaks is of the greatest interest. 29% want ads more personalized to their tastes, and 27% prefer on-screen ads such as banners.

That said, fans are looking for better coverage of the leagues that they love, rather than more in-depth coverage of an individual team.

They are also looking for fewer interruptions, which will require ad innovation from service providers.