Freewheel’s Q4 2017 Video Monetization Report says a lot about how the premium video ecosystem is changing. For example, live is starting to drive ad view growth, the TV is the place to be for engagement, and the smartphone is the swiss-army-knife of streaming.

Freewheel says that total U.S. video views grew 26% in 2017 and total ad views by 22%. However, where the viewing is taking place continues to shift as consumers embrace the connected television and entrench around the smartphone.

We have seen a steady change in the way premium sports providers approach online delivery. The Internet has proven a remarkably effective mechanism for deepening the engagement with tent-pole events such as the Olympics and the World Cup. Sports such as football and soccer are increasingly available live online through authenticated apps, vMVPDs like Sling TV, and for free through platforms like Facebook and Twitter.

All this activity appears to be paying off. Freewheel says U.S. ad views in live video increased from 19% in Q4 2016 to 31% in Q4 2017. What’s more, sport dominates the category with over three-quarters of all live ad-views. In other words, sports are driving one-quarter of total ad-views. Entertainment continues to lead in ad views but only grew its share slightly, from 49% to 53%. The big loser in 2017 was short clips. Its share of ad views halved, to 16%.

Overall, half of all U.S. ads tracked by Freewheel were delivered to the TV in Q4 2017, up from 41% one year earlier. Pay TV set-top boxes accounted for 1-in-5 of those views. Operators started deploying ad insertion technology for the VOD systems in 2014, and this effort ramped up in 2016 and 2017.

Nearly one-third of all ad views came from connected television devices in Q4 2017, an increase of 27% one year earlier. The increasing use of authenticated TV content provider apps and ad-supported services like Crackle and The Roku Channel is one factor in the continued growth of this category. However, the rise of vMVPDs could be the biggest factor.

vMVPDs like Sling TV and YouTube TV enjoyed rapid growth in 2017. TiVo Q4 2017 numbers suggest the size of the vMVPD market could be much larger than the 4.5 million estimated. Dish Network reports that Sling TV has 2.2 million subscribers. YouTube TV could already have more than 4 million subscribers, and it could also mean the total number of vMVPD subscribers is almost double the previous estimates.

The smartphone is the swiss army knife of video 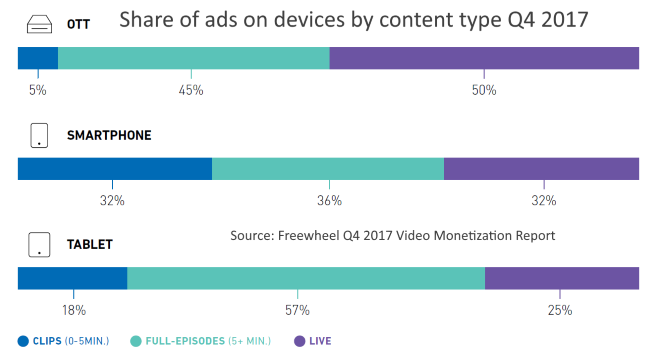 The television is the preferred platform for live video. Half of ad views from connected TV devices come from live content, 45% from long-form, and just 5% from clips. The tablet is preferred more for long-form content (57%) than live (25%) and clips (18%.)

The Freewheel data seems to reinforce the notion that the smartphone is the substitute screen for all content viewing. It is the one screen we have with us all the time. As such, when no other screen is available, it is where we turn if something is happening we want to see, or we have some free time.  We are perfectly comfortable watching football, Wheel of Fortune, or the latest sports highlights on it.

The arrival of premium sports online is having a powerful effect on the mix of premium video people watch.

It is also changing the way they use their devices, with the TV favored for live sport, the tablet for long-form entertainment, and the smartphone for everything.