In the free white paper, The Secret Life of Streamers, Part II, nScreenMedia reported on the huge increase in live premium video viewing in the home. The paper also revealed that the connected TV had become the driving force in consumption of live video. According to the Q1 2018 Freewheel Video Monetization Report, these two trends are still very much in play. 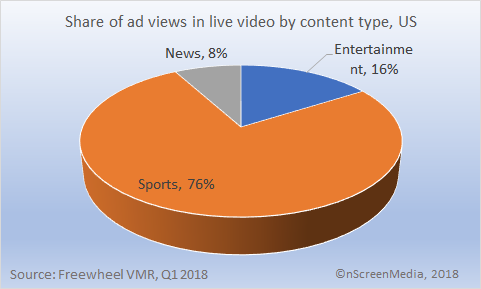 The occurrence of 3 major sporting events in the first quarter is responsible for the big increase in live consumption: Winter Olympics, Super Bowl LII, and NCAA March Madness. However, it is their wide availability online that is relatively new. Until recently, the major television networks carrying premium sports were only available through expensive pay TV subscriptions. In the last year, the emergence of vMVPDs such as Sling TV and DirecTV Now allow people to watch live sports online at a much lower price point.

There is evidence that sports are also driving growth in vMVPDs. App intelligence company Sensor Tower reports that first-time downloads of the top 5 vMVPD services increased 77% in the first week of the World Cup. Leading the pack is the sports-oriented FuboTV. Before the World Cup Sensor Tower estimated that the service average 38,000 downloads per week. In the first week of the tournament, downloads exploded to 309,000!

Connected TV and live sports: a match made in heaven 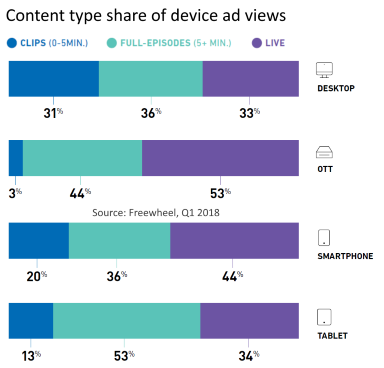 The connected television is the preferred platform to enjoy online video streaming.[1] According to Freewheel, 40% of online video ad views go to the connected TV, 28% to the desktop, 21% to the smartphone and 11% to the tablet.[2]

Live content drives the most ad views on the connected TV. 53% come from live viewing, 44% from full episodes, and just 3% from clips. Live viewing on the connected TV is far higher than on the smartphone, 44%, and tablet, 34%. nScreenMedia’s analysis of Conviva data confirms that the connected TV and live content seem to be a match made in heaven. Average hourly live video play requests per unique viewer increased from 3 in 2016 to 4.6 in 2017.

With its increased availability in vMVPDs and TV Everywhere apps, sport is a key driver of this trend.

The most popular platform to stream live video is the connected TV.

[2]Freewheel includes payTV STB VOD ad views in their diagrams and discussion. I have removed that data to focus on the online video ad views.