As children bail on traditional television, Netflix, Amazon, and Tubi are honing their kid video audience strategy. They are seeking to fend off competition, consolidate control of the TV experience, and capitalize on a rapidly expanding free ad-supported opportunity.

PwC data shows why kids are a critical focus for online video service providers. The company says children between the ages of 2 and 11 watch 35% fewer hours of live and time-shifted TV than they did in 2014. Only teenage viewing has fallen faster and is down almost 50% over the same period. 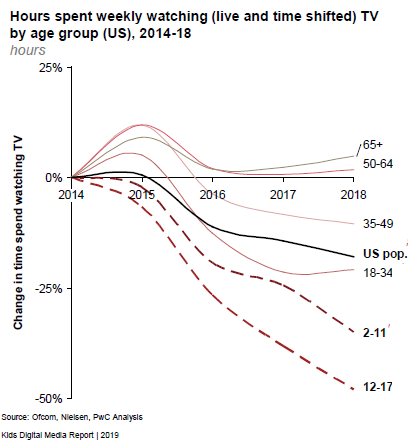 At the same time, YouTube has become a key destination for young viewers. In 2017, 42% of children between 8 and 11 liked to watch TV and YouTube about the same, with 40% preferring YouTube. In 2018, the number preferring YouTube increased to 49%, while those liking both slumped to 37%.

Services like Netflix and Amazon Prime Video have made children a critical focus over the last several years. They know that providing a safe quality environment for their entertainment is a vital criterion for parents. New moves by both companies show they are sharpening their focus on children while other companies are stepping up to challenge YouTube for the free ad-supported opportunity.

Disney is throwing the full force of its children’s content creation machine behind the upcoming Disney+ service. It is also pulling back children’s shows like Sofia the First and movies like Toy Story from Netflix to cement Disney+ as the preeminent children’s online TV service.

Netflix is going on the offensive. It is swiping Disney’s top creative talent to help fill the holes left by the departure of Disney’s market-leading content. The New York Times reports that several senior Disney executives have taken their creative talents over to Netflix:

Tubi, the free ad-supported on-demand TV service, sees an opportunity to provide kids and families with a safe place they can go online to watch family-friendly content. Tubi Kids will launch on October 21st in the US and the UK in 2020. A library of 5,000 hours comprised of 1,200 kid-friendly movies and television shows supports the new service. Viewers can expect to find films like How to Train Your Dragon and Norm of the North and series featuring Sonic the Hedgehog, Paddington Bear, and The Wiggles. 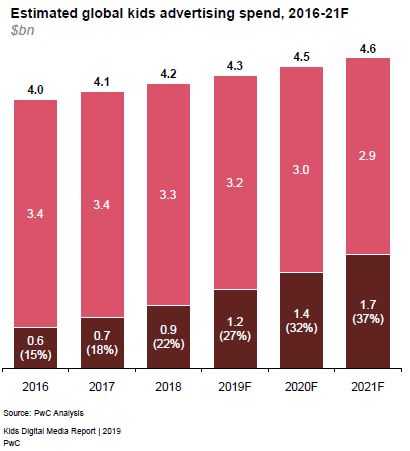 Stepping into the children’s market could be a good move for Tubi, at least according to PwC. The company says kids’ global digital ad spending will grow from $0.7 billion in 2017 to $1.7 billion in 2021. At the same time, non-digital advertising will decline from $3.4 billion to $2.9 billion over the same period.

Amazon continues to integrate its video services into the Fire TV experience. Earlier this year, it integrated IMDB Freedive – now called IMDb TV – into the Fire TV experience providing a ready source of quality free ad-supported content. Now it is integrating its Freetime kids service into the platform. Previously, the Freetime apps were only available on mobile devices using iOS, Android, and Fire tablets.

Freetime is a subscription service bringing together movies, books, and apps in a kid-friendly environment. The ad-free service Freetime Unlimited provides access to movies and TV shows from Amazon Studios, LEGO, and Mattel and some appropriate titles from the Prime video catalog. The single-stream version of the service costs $4.99 a month or $2.99 for existing Prime members (multiple stream access cost $9.99 and $6.99.)

If you enjoyed this opinion piece, sign up for our free newsletter and get them right in your inbox every day, or get our digest every Friday morning.

Children’s content is a critical battleground for the subscription dollars and attention of online viewers.

Netflix is adjusting its strategy to face down new competitors like Disney+.

Amazon is using kid content to solidify its control of the connected TV experience.