Tennis fans do not have to worry about missing any of the key moments in the US Open Tennis Championships. The just launched IBM Watson Media is watching every game and making sure fans catch every match-point, ace, and on-court tantrum.

Earlier this year I interviewed David Mowrey, Head of Product for IBM Watson Media, about a suite of tools the company was working on for media. The tools leverage Watson’s cognitive abilities to liberate what Mr. Mowrey calls video’s “dark data.” Today, the company launched IBM Watson Media, a suite of tools capable of analyzing images, video, and audio to extract new information about the tone and sentiment of the media.

US Open tennis and Cognitive Highlights

A key component of IBM Watson Media is being used to enhance the online and in-stadium experience of the US Open Tennis Championships taking place now at Arthur Ashe Stadium in New York. The Cognitive Highlights tool is analyzing the on-court tennis match to extract video clips of key points in the action. Some of the data Watson is processing to do this includes:

Combining these elements, Watson can identify key moments such as aces, match points, and on-court tantrums. The tool extracts a clip of the event and gives it an interest score, or “rank.” According to Mr. Mowrey, this ranking is tournament-wide: 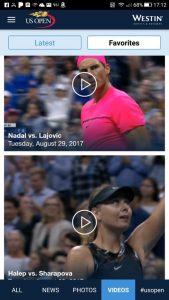 USTA is using this Watson-curated set of US Open clips in four different ways:

The US Open is not the first time Watson has been used to generate sports highlights. It was tested out at Wimbledon and the Masters Tournament before release.

Once Watson has liberated the dark data from the tennis matches, Mr. Mowrey says that other media tools can be used automatically to generate a highlighted playlist:

“When you know what’s happening in the matches you can also use that data to filter down – give me all the aces, give me all the game points. All the key points in a US Open match.”

The tools to generate these enhanced playlists are part of the IBM Watson Media suite. They include:

The initial IBM Watson Media toolset will be available in September.

During a tournament or fixture-laden day in a pro-sports league, it is impossible for a viewer to watch everything they would like. Until now, the creation of highlight reels was a labor-intensive process, heavily restricting the number and the type of highlights created.

Tools such as IBM Watson Media can be used to automate much of the highlight creation process. Sports organizations and aggregators can create customized highlights for individual viewers, giving the fans exactly what they want precisely when they want it. Such personalized content should increase fan engagement, a highly desirable outcome in today’s crowded sports market.