Half of OVPs say revenue not primary driver for service

A new report from Newbay Media, and underwritten by Akamai, makes it clear that the market for OTT video is maturing. OVPs are looking to bring a top quality experience, and recognize that the value of service goes well beyond simple revenue.

The report The State of Direct to Consumer Internet Video Services details a survey of 389 US based media related companies that have launched, or intend to launch, direct to consumer video services. It makes clear these companies have very different aspirations for the services than SVOD services launched previously. For example, nearly half do not look at these services as purely a money-making venture. They see other values, such as brand recognition, and education, that justify the launch.

The drive to quality also looms large in the data. Standard definition video is fading fast, while HD is becoming ubiquitous. On average, the online video service providers (OVSPs) spoken to in survey said 35% of their library is standard definition, while 48% say they have no SD video at all. One year from today, the OVSPs anticipate the amount of SD content falling to 29%. 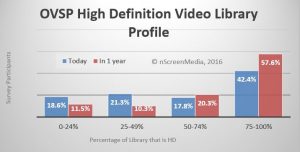 Conversely, high definition (HD) video continues to grow in leaps and bounds. The average OVSP says that 59% of their video library is HD today, and that will grow to 71% one year from today.

The group is also remarkable optimistic for the growth of ultra HD. The average OVSP says that 6% of their library is already in the Ultra HD format, and that one year from now UHD will account for 17% of the library. This is particularly surprising, because it is becoming clear the Ultra HD’s success may be tied to the inclusion of High Dynamic Range (HDR.)

Most people can’t see the difference between a UHD and an HD picture on standard (sub 55”) televisions, but they can see the difference between HDR and standard dynamic range on pretty much any size screen. Unfortunately, HDR has yet to be ratified as standard, and video shot in HDR is not compatible with SDR television. That means UHD televisions purchased up till now will not be able to render any of the HDR content when it becomes available.

Netflix has been very focal in its belief that the linear television format is on the way out. Ted Sarandos, Netflix’ Chief Content Officer, recently said: 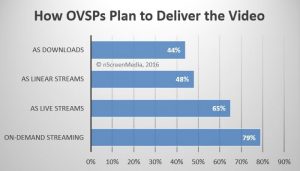 Our survey group certainly favor on-demand delivery, with 79% saying they planned to deliver some or all of their content this way. However, 48% plan to delivery linear streams, and 21% plan to deliver more than 10 channels.

If you would like to learn much more about the findings of this study report join me, New Bay Media and Akamai in a free webinar taking place Tuesday April 26th at 11:30 AM Pacific, 2:30PM Eastern.

Online video providers are showing a more mature approach to the expectations from their services.

Many also look at the services as providing more than just simple revenue.

They are also unwilling to give up on the traditional linear format in the digital domain.