Half of mobile video viewers want ability to download

With more than half of U.S. adults watching video on a smartphone, the smallest screen has become one of the biggest targets for video services. Unfortunately, the experience is anything but perfect. New data from Penthera shows the ability download video is a popular cure for the temperamental mobile streaming experience. 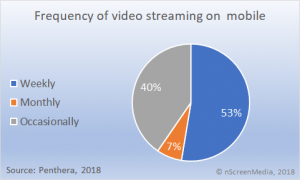 Penthera surveyed 804 U.S. adults between 18 and 64 years-old that watch mobile video. The company found that over half of the group watched on a weekly basis, 7% monthly, and 40% only occasionally.

Unfortunately, many viewing attempts are anything but smooth. 3-in-5 respondents say they experienced video viewing problems half the time they watch or more. Only 8% report they never see a problem.

As we have seen in other data, buffering remains far-and-away the most frequently reported problem. 65% of respondents say they have seen the problem. 50% cite annoying ads as causing them frustration. Long video load times also remain a problem, with 40% citing it as a source of frustration.

Consumers seem resigned to the fact that mobile video viewing is an inherently frustrating experience. When they encounter a problem, 54% say they give up and try again later. Amazingly, half accept that streaming is a frustrating activity, but continue to do it anyway.

There is a downside to this poor performance for service providers. 11% say the frustrations would prompt them to cancel their subscription. Worse still, 5% will give a bad review in the app store.

However, service providers can do something to help their customers avoid all the frustrations inherent in mobile streaming: allow them to download video to their device.

Amazon Prime Video began allowing customers to download episodes of shows to their mobile device in 2015. Netflix was slow to follow, waiting more than a year to add the feature. From the looks of the Penthera data, both were wise to introduce the feature. 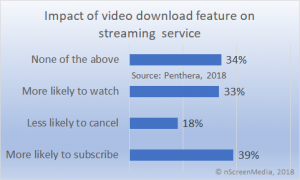 Download2go could also be helpful in winning and retaining subscribers. 39% said they’d be more likely to subscribe to a service if it offered downloads, and 18% said they would be less likely to cancel. 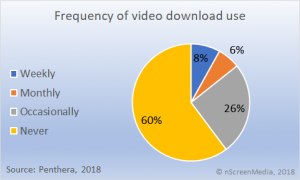 Consumers attach a high value to the ability to download even if not many use it on a regular basis. Overall, 40% have used the feature, if only occasionally. 14% say they download monthly or more often. 8% are weekly users.

Given the enthusiasm for downloading video, it could be worth service providers doing more to make it more useful. One problem with download is that you have a remember to do it before you get in a situation where you need it. Companies like Amazon and Netflix have very detailed data on the habits of their users. They could anticipate a frequent mobile viewer’s needs and proactively download the next episodes of favorite shows to the user’s device. They could also notify the user when a new episode of a favorite show is available and offer the option to download it.

Half of U.S. adults watch video on their mobile device, and 3-in-5 of those experience problems 50% of the time or more when they view video.

Giving customers the ability to download videos could help address the quality issues for service providers.

Though only 14% are regular download-to-go users, half of mobile video viewers want their service provider to support video downloads.